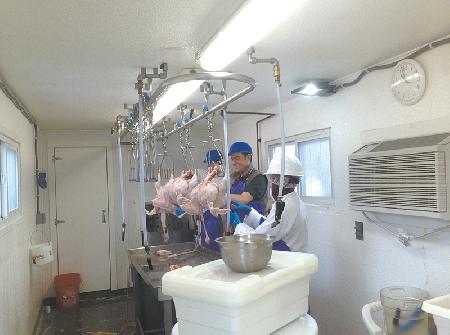 Beth Whiting and Bruce Hennessey, Maple Wind Farm, solved their poultry-processing problem by setting up a USDA-approved processing operation on their farm. The diversified producers of pork, beef and poultry had to find an approved processor or drop back to the 1,000 chickens a year level allowed under uninspected, on-farm processing. Previously they had expanded their chicken numbers to 2,500 per season by using a state-sponsored Mobile Poultry Processing Unit.
"When the state sold it, we had to find a solution," says Whiting.
The first step for Maple Wind Farm was to buy a Plant In A Box (Vol. 38, No. 4) from Featherman Equipment (www.feathermanequipment.com; ph 660 684-6035). The 8 by 40-ft. container was billed as a turnkey USDA inspected facility ready to be hooked up to water, propane and electricity on the farm. The cost was $75,000, well below traditional building costs.
With help from the state of Vermont, a wastewater facility was built on farm. A $15,000 grant from the state helped with site and utility work.
Unfortunately, there were significant problems with the set up. Whiting gives Featherman credit for paying for improvements needed to fix the problems. Luckily they had started under state inspection, electing to apply for USDA inspection later.
"Our state inspector allowed us to work through the problems, as long as we were making steady progress," says Whiting.
In 2014 their barn burned, and they rebuilt and expanded, continuing to use the PIB. Instead of replacing the walk-in cooler, they went with a blast chiller that eliminates ice water chilling.
"The chilling facility allows us to keep birds in a cooler so we can spread processing and packaging out over 2 days," says Whiting. "It also adds value, quality and safety to our products."
With the expanded on-farm processing, the number of birds and how they are raised has changed as well. In 2016 they raised and processed 18,500 broilers and 750 turkeys.
To do so, they switched from 10 by 12-ft. chicken tractors to mobile high tunnels on skids with automated waterers and hanging feeders. They now have eight, 21 by 36-ft. mobile field shelters, each housing up to 500 birds. Chicken wire keeps birds in and predators out, and sides can be raised or lowered to match the weather.
"The biggest advantage is labor savings," says Whiting. "It takes 2 people 10 min. to move 500 birds. It used to take 3 people 35 min. to move the same number of birds. The birds are also better sheltered against bad weather. Last May we experienced a late snowfall with high winds. The birds remained dry and relatively warm. It would have been a disaster with the chicken tractors."
Whiting and Hennessey reserve the processing facility on Thursdays for other producers who can bring their birds for custom slaughter. In 2016 they processed 8,000 birds for other producers at a price of $5.50 per bird (minimum of 200). The price includes heat shrink wrapping, labeling and USDA inspection.
"Large producers book ahead during the winter as they plan their flocks for the year," says Whiting. "We definitely serve a need, as there isn't another USDA plant for many miles."
Whiting reports recently processing 765 broilers in a single day, her highest number yet. The potential volume allows her to accommodate smaller operations with 30 to 50 broilers. In any one day, they may process birds from 2 or 3 producers in addition to Maple Wind Farm birds.
"The availability of USDA inspection adds a lot of value to our poultry and the poultry industry in Vermont," says Whiting. "It lets us expand our sales to greater New England."