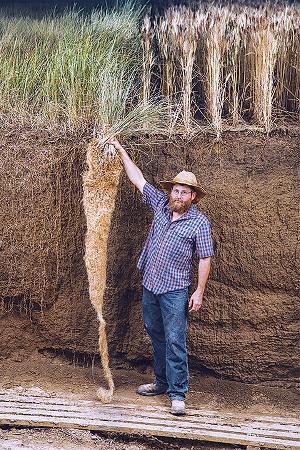 After several decades of development, a perennial wheat variety called Kernza (Vol. 40, No. 1) has found a market.  It's being used to brew Long Root Ale produced by Hopworks Urban Brewery, Portland, Ore. (www.patagoniaprovisions.com; ph 415 729-9956).
Hopworks replaced 15 percent of the grain normally used in their ale with Kernza. The end result is described as a pale ale with "...resinous, grapefruit hop aromas and flavor with a balanced maltiness."
"Kernza adds great flavors to this delicious pale ale," says Christian Ettinger, Hopworks Urban Brewery.
The beer is named for Kernza's dense root system that can descend as far as 10 ft. down into the earth. "I didn?t think we would have a product on the market yet," says Lee DeHaan, The Land Institute, a Kansas-based nonprofit that has led development of Kernza.
Researchers and growers in Minnesota, Wisconsin, Utah and Kansas, are working to develop the "wheatgrass" into a viable crop. University of Washington researchers have crossbred Kernza and wheat. The perennial hybrid produced is called Salish Blue. Researchers there face the same challenge as do those working on Kernza.
"We need to increase yields and improve our understanding of how to grow it," says DeHaan. "Yields are still only around 20 percent of conventional wheat varieties. We are hoping for much more."
Kernza for the Long Root Ale is being grown under contract by farmers in northwestern Minnesota. A number of restaurants are finding other uses for the small grain, and some large food processors are considering introducing it into their products.
Kernza eliminates yearly tillage and reseeding since it re-grows each season. Researchers at the universities of Minnesota and Wisconsin are studying possible uses of Kernza as a pasture or forage crop.
Contact:  FARM SHOW Followup, The Land Institute, 2440 E. Water Well Rd., Salina, Kan. 67401 (ph 785 823-5376; www.landinstitute.org/our-work/perennial-crops/kernza).