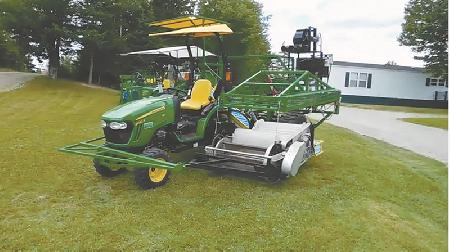 Leon Perry's home-built wild blueberry harvester makes it easy to pick wild blueberries without driving over them first, reducing field losses.
Wild blueberries grow only about 12 in. high, as opposed to domestic bushes that grow much taller at 4 to 5 ft. Perry built the machine because he's greatly expanding his wild blueberry acreage and is also building a blueberry processing factory that will take in berries produced by other local growers. He's convinced his wild blueberry harvester is the best on the market.
"Wild blueberries are higher in anti-oxidants than cultivated blueberries and more healthful and therefore command higher prices," says Perry. "There are many wild blueberry harvesters on the market, some smaller and some larger than mine. The most common mass-produced one sells for up to $250,000. I'm trying to build a machine that will pick premium berries with as little damage as possible."
He has built 4 wild blueberry harvesters so far 2 for himself and 2 for other growers.
"Wild blueberries are grown predominantly in Maine and eastern Canada," says Perry. "They're far less common than cultivated blueberries but are becoming more popular. About 100,000 acres are grown in the 2 countries. But in the last 3 years producers in Maine and Canada have cleared about 30,000 more acres of new land to grow them."
His harvester is built on a subframe that runs directly behind the tractor instead of out to the side to avoid running over blueberries. The front part of the subframe is welded to a backhoe loader-type mounting bracket that attaches to the tractor, while the back part is supported by a separate set of wheels and axles located about 7 ft. behind the tractor. As a result, the harvester can be operated by a small 30 hp. tractor. "The in-line design of my harvester also makes the machine much more stable on hillsides," says Perry.
The machine's 31-in. wide pickup head is suspended by springs instead of wheels as on conventional blueberry harvesters. The head sends blueberries onto a conveyor that unloads them into plastic totes that set on a walkway on one side of the platform. A worker then moves the loaded totes to the back of the platform, which can hold a total of about 60 totes.
To support the subframe, Perry removed the wheels from the tractor's rear axles and moved them 7 ft. back onto individual axles made from 4140 steel. He mounted big 32-tooth, No. 100 sprockets on the tractor axles and uses them to chain-drive the new axles. "The new individual axles have their own differential lock and brakes," says Perry.
ˇˇˇ The machine is operated by 2 pto-driven hydraulic pumps - one runs a blower that removes debris from the conveyor, and the other operates the pickup head. It's also equipped with vinyl shades that keep the sun off the driver and worker.
Perry sells his wild blueberry harvester for about $70,000. You can see a video of it in action at FARMSHOW.COM
Contact: FARM SHOW Followup, Leon Perry, P.O. Box 79 , Addison Maine 04606 (ph 207 461-6531; lpdaughters@aol.com).