Self-Propelled Workbench Drives To The Job 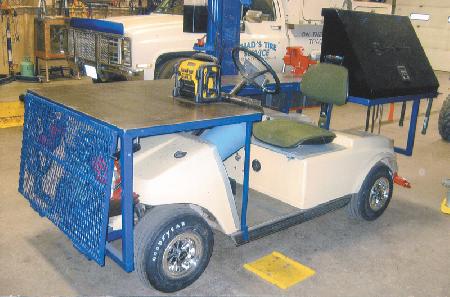 "This portable work bench saves a lot of steps and makes my job as a self-employed mechanic a lot easier. I think farmers with big shops could benefit from the same idea," says Chad Goetzinger, owner and operator of Chad's Tire and Repair Service in Plainview, Neb.
He recently sent FARM SHOW photos of his modified electric golf cart that carries all kinds of different tools and supplies. The cart is fitted with a big metal frame that wraps around 3 sides of the vehicle and attaches to it with 4 bolts on front and back.
The frame supports a metal platform that serves as a workbench. There's a Montezuma toolbox on one side just behind the driver, and a fold-out compartment covered by an expanded metal "rack" on front for storing air, standard jacks, and a set of acetylene tanks. A pair of scissors jacks on back are used to stabilize the workbench. A Wilton vise fits onto either end of the workbench.
Each scissors jack is attached to a threaded rod that runs up through the frame. "I use a cordless impact wrench to buzz the jacks down to the floor or ground. It keeps the whole workbench solid so that it doesn't wiggle from side to side," says Goetzinger.
On the passenger side of the cart there's a pair of big built-in drawers and a half dozen bins, as well as 6 smaller drawers lined up vertically.
"It's a real conversation piece around here," says Goetzinger. "A lot of people have come in to see it, and everyone wants to take photos. A lot of farmers with big shops in the area want me to build one for them.
"I came up with the idea because I operate a one-man shop where I work on farm tractors, trucks and other equipment. There's a big lot behind my shop where I'm often working, but it seemed like I never had the right tool with me so I had to walk 50 or 60 ft. back to get it. One day I was installing an air bag on a truck outside the shop, and I counted 11 different trips that I had to make back to the shop just to get a different tool or part."
The rack on front is supported by a pair of light chains and can be used as a base for either jack. ?It works great to change tires. I flip the rack down to the ground and set the jack on top of it," says Goetzinger. "I can also use the rack on the ground to drag big truck tires into the shop.
"When I'm done at the end of the day I throw everything on the workbench or rack and drive the cart back into the shop, and then put everything away."
He says he uses the drawers to keep small tools and parts such as cotter pins, clevises, hose clamps, electrical wire, and connectors, punches, small bolts, and all kinds of other stuff including bolts and washers " anything that he might need when working on equipment.
"The whole works comes off with 4 bolts and an overhead crane, but I seldom take it off because it's so handy," says Goetzinger.
This isn't the first time he has modified a golf cart. "I'm an avid prairie dog hunter and about 20 years ago I converted a gas-powered golf cart into a portable shooting table. It's fitted with 4-wheeler tires, a shooting bench, and a place to put ammunition. I widened the seats on it so that I can drive around prairie dog towns and shoot from it," says Goetzinger.
Contact: FARM SHOW Followup, Chad Goetzinger, 208 1/2 South Main St., Plainview, Neb. 68769 (ph 402 582-4581 or cell ph 402 841-9006).