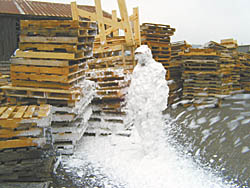 The technology of fighting fire with foam isn't new, but one company has developed an easy-to-use system that'll stay ready to go in standby mode for years.

Fire Solutions has sold foam fire protection systems for five years to fire departments and other agencies, according to Wes Hunter, co-owner of the Eugene, Ore., based company.

Recently the company started marketing and selling smaller units for farm and ranch use. The units can be stored in the corner of a building or mounted on the back of an ATV, tractor or other vehicle.

"Our delivery system is unique from others," he notes. While competitors mix ingredients in the tank to make foam, Fire Solutions uses a water-powered injection system to create the foam outside of the tank.

"It's more efficient and you don't have to clean out the tank and hose," Hunter says.

With 30 years of experience in fighting fires, Hunter developed and patented the compressed air system to be simple enough for anyone to operate. He also built it so that it would run without electricity or water (other than what's in the tank).

Foam sprays out 50 ft. or more. Each gallon of water produces 20 gallons of foam. There's enough foam in the unit for three tanks of water. After using up the foam, it's easily refillable.

"Foam puts out fires very fast," Hunter says. Unlike water, which skips over some surfaces, such as smoldering hay, the detergent-based foam penetrates. Since it lasts a couple hours, foam can also be used as a preventative measure to coat a building before a fire reaches it.

Foam suppresses all types of fires including gasoline and electrical, Hunter says, and it doesn't damage computer circuitry. Unlike water, foam leaves little damage after the fire is out. It's non-toxic and biodegradable, just dissolving away.

"It's very practical in the sense, that it can sit in the corner of a barn for years," Hunter says about the Fire Solution units. "When you need it, it's going to work."

For people in the country or on the outskirts of urban areas, the ability to start fighting a fire immediately can make a huge difference.

"As a rule of thumb, a fire doubles its size every three minutes," Hunter says. With a Fire Solution unit, a homeowner can put down or at least control a fire before the fire department arrives.

Hunter adds that Fire Solutions units can also deploy microbes with the foam to clean up fuel and oil spills. Producers use microbe foam to spray down animal and poultry barns to eliminate odor.

Larger units are also available through Fire Solution's website and through several dealers.