Farm-Sized Pellet Machine Lets You Make Your Own Fuel 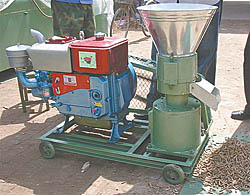 "The sky's the limit!" That's what Dan Hier says when asked what raw materials can be used to make pellets in his Pellet Pro pelletizer. The only requirement, he says, is that whatever you use be able to pass through a 1/4-in. screen. Larger materials need to be run through a hammer mill first to granularize it.

"My partner Paul Lamb and I both have Woodmaster Plus corn/wood pellet furnaces. Sometimes we'd rather sell corn than burn it," says Hier. "We began looking at pellet mills, but they started at half a million dollars and went up from there. We looked for something more affordable and found a company in Asia that makes smaller, farm-sized systems."

Lamb, Hier and Hier's wife Tracy started importing the pellet-making equipment. They have since sold mills in a variety of sizes along with hammer mills, dryers, coolers, baggers and complete systems. They also sell a briquette machine that produces a charcoal log from a variety of biomass materials such as sawdust, corncobs and stalks.

"The mills range in output from 65 lbs. an hour for a mill to a turnkey, 2-ton per hour system with dryer/cooler and bagger," says Hier. "In the middle is a portable mill that will do about 650 lbs. an hour."

Pellets produced by Pellet Pro's mills vary in density from 44 to 70 lbs./cu. ft., depending on the source material. The Pellet Fuels Institute has an industry guideline of 40 lbs./cu. ft.

The mills use replaceable mold and die sets. Hier suggests they'll last from 160 to 200 hours, again depending on the material they're used with.

He reports a lot of interest in switchgrass as well as distillers dried grain with solubles. "We've tried a 50/50 mix of distiller's grain and kiln dried sawdust, and it work great," he says.

Small saw mills and cabinet shops have shown a lot of interest, he adds, as well as entrepreneurs interested in getting into the commercial pellet business. He points out that federal and state grants available for alternative energy production can reduce the cost of a system significantly. The USDA in northern New York has bought a portable mill with plans to demonstrate it from farm to farm.

Regardless of what size mill or material used, Hier says the key to getting good pellets is to have the correct moisture content. He notes that distiller's grains typically come out of ethanol plants at 12.5 percent moisture and need moisture added to make good pellets. Other materials may be too wet and need to be mixed with drier material.

A second key to pellet making for fuel is cooling and drying. "Pellets come out of the mill at temperatures of 120 to 180 degrees, depending on the material they are made of," he says. "Small quantities can be air dried but large quantities need to be run through a dryer/cooler. As they cool, they get harder."