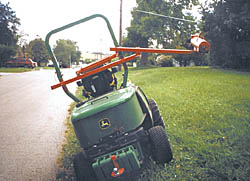 "I like my Deere 1420 mower with a 60-in. front deck except it has too many built-in safety features that shut the engine down if I squirm on the seat or hit a bump," says Elmer Pinkerton of Elmwood, Neb.

To solve the problem, he built a 150-lb. counterweight to hold the mower stable on slopes. The counterbalance system consists of a frame made from 2-in. rectangular tubing that bolts onto the mower's ROPS. A hinged arm is fitted with a 6-in. dia., 2-ft. long solid steel weight. Pulling on a lever retracts a hydraulic cylinder to bring the counterweight to a nearly horizontal position, keeping the mower from tipping over on hillsides. Pushing on the lever extends the cylinder to drop the counterweight straight down alongside the mower.

"It really works well," says Pinkerton. "I bought longer hydraulic hoses that quick connect to the same remote outlets that control the snowblower chute direction. I don't use the snowblower on hillsides so I remove the system during the winter by simply removing two wing nuts."