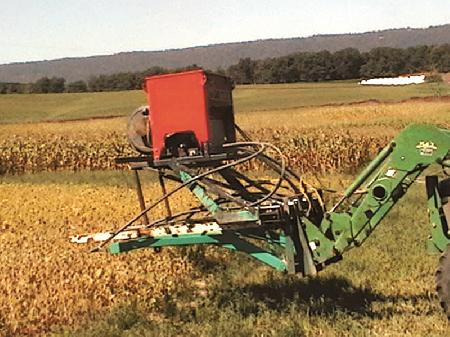 Mounting their Gandy air seeder on their tractor loader let Virgil Gutshall and his son get a head start on their cover crops. The Gandy unit had been installed on their liquid manure injection system (Vol. 40, No. 4).

We wanted to seed cover crops in soybeans prior to leaf drop to establish the cover crop before combining, says Gutshall. Most farmers try to seed the cover crop after harvest, which gives it little time to grow before winter sets in.

The first step was to mount the Gandy to a salvaged toolbar with drops to deliver seed between six 30-in. rows with each pass. They fabricated a base for the Gandy from channel iron.

The toolbar was in turn mounted to an old bale hugger that had its arms removed. The bale hugger frame had been designed with a quick-tach coupler for their tractor mounted front-end loader.

It was easy to run the electrical wires back to the tractor seat and install a switch to turn the Gandy on and off, says Gutshall. We used a hydraulic line from the loader to power the fan and used the hydraulics lever to control fan speed.

Gutshall got a good stand of cover crop, thanks in part to a timely rain in September that helped germination. He reports that the seedlings were just coming through at harvest.

It worked well enough that we will go to 12 rows next year by extending the toolbar with some pipe and adding more drop tubes, says Gutshall.