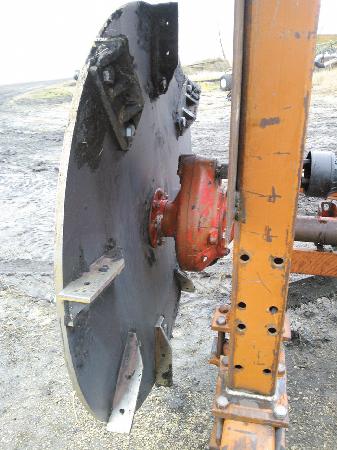 Leroy Groening designed and built a rotary ditcher with a 59 1/2-in. dia. flywheel to dig drainage ditches on his Manitoba farm.

Groening made the ditcher from a cultivator frame fitted with a combine drive axle with gear reduction that pto-drives the flywheel. He used one of the cultivators wing lift cylinders for depth control.

The drive axle is from an old Massey 92 combine. He cut the axle in half and mounted it onto the cultivator frame, then attached a pto driveline from the tractors 1,000 rpm pto to the axles input shaft. Using Sketchup 3D modeling software (www.sketchup.com) he drew up the flywheel and paddle parts and then gave the dxf files to a machine fabrication shop, which used a laser cutter to form the parts.

The flywheel is made from 3/4-in. thick steel plate and has 8 paddles bolted onto it. By having the parts laser-cut I didnt need to drill any holes, and everything fit together precisely, says Groening.

He uses a Deere 7200 tractor rated at 92 pto hp. to pull the machine. I tried my ditcher out for the first time last year and it worked quite well, although the frame could use some more weight to keep the machine from drifting to the side, says Groening. Also, using a cultivator equipped with walking axles might have worked better because the ditcher wouldnt bounce up and down as much over rough ground, and the walking axles would help with floatation in wet conditions.

A pair of steel gathering blades under the frame move dirt toward the center, which results in a wider cut than just the radius of the cutting wheel. The blades are located a bit higher than the bottom of the flywheel.

A metal fender over the flywheel protects the ditchers laser receiver and also helps keep dirt from flying up onto the tractor. An electric-hydraulic valve is used to control digging depth. The valve connects to a unit on the tractor that works with the laser receiver, and automatically adjusts the ditchers height as Im driving, says Groening.

He says he doesnt have plans to develop the ditcher commercially at this point. New commercial ditchers are quite expensive, and this was a way to build my own ditcher at a fraction of the cost. I also had the fun of building it, he says. The gathering blades I made are a bit primitive, but they work.

You can see a video of the ditcher at work at www.farmshow.com.