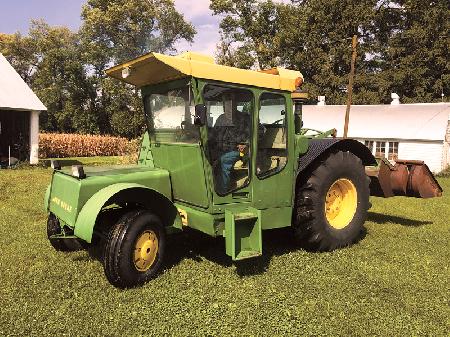 When Virgil Davis retired his Deere 6600 combine after nearly 30 years of service, he says the engine, cab, hydraulics and drive train were still in good working condition. I hated to send it off to the junk yard for parts, so I decided right then to make something special from it, Davis says. Piece by piece he dismantled the machine, removing the grain tank, cab, the engine, the feeder house and the grain separator system.

I really just tore the machine apart and got down to the drive and steering wheels and the chassis, then figured out how to rebuild it. The engine, cab, transmission, lift cylinders on the feederhouse and the steering were all good, so I just set out to make it into a tractor.

Davis first cut the frame apart and moved the steering wheels from the back of the machine to the front. He made the frame long enough to allow room for the cab and for the engine to set in front of the large drive wheels and behind the front wheels. The fuel tank mounts between the rear wheels. Now the cab is just one step off the ground so you dont need a ladder, Davis says.

The inside of the cab has the same configuration as the combine, with the shift lever, throttle and hydraulic controls to the right of the seat. The front of his tractor has a nicely formed hood made from the back section of the combine. The front fenders are made from sheet metal and the rear fenders are cut from a black poly water tank. Davis added a hitch in front of the wheels so he can use the tractor to pull or push wagons in his yard.

The back of Daviss machine has a heavy-duty work station complete with a 3-pt. lift and quick hitch. He adapted the feederhouse cylinder mounts to hold the bottom of the two lift arms. A heavy-duty U-bracket mounts above the transmission frame to hold the cylinder that raises and lowers the hitch. Triangulated braces from the top of the hitch and a cross bracket to the frame of the tractor provide extra stability for the hitch.

Davis uses the tractor to mow, grade, plow and can even use the tractor for tillage. In the winter, Davis has a large 10-ft. snow bucket that he uses to push and pile snow. The bucket has 18-in. extensions on both sides to cover the full width of the machine.

I cant really lift and pile snow like a loader would, Davis says, but I sure can push it and pack it because its so wide. He mounted an 18-in. convex mirror just behind and to the side of the cab so he can easily see what hes pushing just by looking to the side. I really like how the tractor turned out, especially that it has a 3 pt. hitch, a pto and live hydraulics. It took me several months to build it, but I didnt have to buy a lot of extra parts, Davis says.