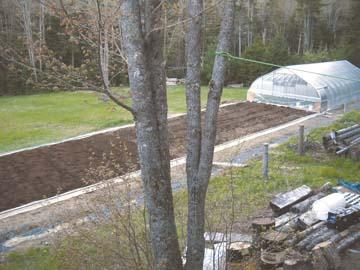 Phil Norris rolling greenhouse stretches out his growing season without the pest problems of a stationary greenhouse. Norris and Deborah Wiggs operate a 13-acre organic farm on the coast of Maine. Getting an early start and keeping at least one set of beds in production late into the fall helps the bottom line.

The first week of March in 2014, we were planting inside when the ground outside was still frozen and snow covered, says Norris. This year we had a really harsh winter and couldnt plant until the second week of March.

Neighbor and experienced rolling tunnel builder Eliot Coleman was a handy resource. He suggested a 48-ft. long by 22-ft. wide high tunnel that could be easily vented from end walls.

Norris designed the rolling high tunnel to traverse four 48-ft. plots over the course of the year. He bought high tunnel bows and cross members from Rimol Greenhouse Systems. End walls were not included.

He constructed the framing on top of two 2-in. galvanized pipes laid with a gentle curve to match the site. Rather than lay the pipes on the ground, Norris cut up old pond liner and set them on it. Each bow was pre-tensioned with a come-along and locked at exactly a 22 ft. width with a cross member. The bows are mounted on sheaves and roll easily on the rails.

A big challenge was what to do for end walls and an entry door. Norris needed cross framing on the ends for structural integrity when moving the high tunnel. Moving his entry door to the side allowed him to put a steel crossbar at waist height on both end walls with more framing above it.

As winter approached in 2013, Norris covered most of the framework including the west end wall, with poly. The area above the crossbar on the east end (exposed to battering winds) was covered with rigid polycarbonate.

End walls below the crossbars needed special attention as the tunnel would need to roll over an existing crop to move into place for planting the next crop in a season. Norris hung poly below the crossbars at both end walls. It was fastened with wiggle wire to a piece of double wire lock positioned 42 in. above the soil.

When the poly is rolled up, it is well above the lower crossbar, allowing 32 in. of clearance, says Norris. Rope loops at the end of the roller secure it rolled up.

He fashioned a temporary solution for a side door with a flap of poly sealed around the edges with wiggle wire. The next spring, he bent steel tubing to match the shape of the sidewalls, welded up a door frame and covered it with polycarbonate.

I hung the 4-ft. wide door with sliding barn door hardware, says Norris. The bottom of the door is free and held down by gravity.
The tunnel is vented with a scissors-type closure at one end. Triangular pieces of polycarbonate with wooden frames are hinged in place in both peaks. Temperature sensitive hydraulic cylinders start to open the vents at 75 degrees. At 85 degrees they are fully open.

A wireless sensor in the middle of the high tunnel sends temperature and humidity data to Norris office where it is monitored and graphed.
During a Maine summer with both end walls fully vented, the temperature in the high tunnel never went over 99 degrees, says Norris.
The peppers loved it.

Thanks to an overhead sprinkler system, the high tunnel also serves as rolling sprinkler. In a minute he can roll the entire house forward over any of the 4 plots and deliver an inch of rain in 2 hours. Then he can roll it back into position.

The tunnel rolls more easily than any other movable greenhouse I have ever seen, says Norris. Two people can push it by leaning on the corners.