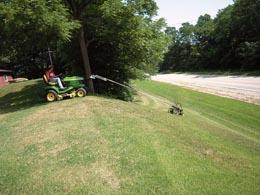 If you've got a steep hill to mow, you'll like this "push 'n pull" mower developed by James Lake, Rio, Ill. He uses his Deere riding mower fitted with a 16-ft. long tongue to push and pull a 22-in. mower on a steep hill in his front yard.

All together, the riding mower, tongue and push mower are about 27 ft. long. It's sized so that when the mower reaches the bottom of the hill, the riding mower is still on flat ground. The driver then backs up at a slight angle to cut a new swath going up the hill.

"It's easy to operate and safe to use," says Lake. "I use my Deere X758 4-WD diesel riding mower equipped with a hitch on front. I cut a full strip on the way down, and cut as much unmowed grass as I can on the way back. It's a lot easier than mowing the hill by hand, and I don't have to worry about tipping over."

He made the tongue by sawing the rungs out of a 16-ft. aluminum ladder and then bolting the 2 sides together, using a couple of 2 by 4 braces.

The tongue swivels back and forth on a 2-in. ball mounted on front of the riding mower at about 3 ft. off the ground. The ball mounts on a heavy duty steel bracket attached to a receiver hitch that was already on the riding mower.

"I had to keep the end of the tongue high so the tongue doesn't catch on the ground as the push mower goes over the edge of the hill. I even bolted some boards on between the coupler and tongue to increase the height," says Lake. "The receiver hitch is only 1 1/4 in. square and wasn't strong enough or high enough to take all the pressure the tongue would put on it, so I added some steel braces and bolted them to the tractor?s frame."

The push mower end of the tongue bolts onto a piece of plywood that's free to swivel up or down via a pair of big barn hinges. Lake folded the push mower's handle and bolted it down to the deck to form a triangle. Then he made a metal bracket to support the plywood and bolted the hinges onto each side of it. He also bolted a piece of laminated metal onto the plywood and then drilled holes all the way through it and the plywood, allowing him to bolt on a short block of wood at the end of the tongue.

"I can't believe how nice the hill looks when I'm done. I get a lot of compliments on it," says Lake. "Passing drivers are often surprised when they see the push mower coming down over the hill, but can't see the riding mower because it's hidden behind the hill. Once they see the driver they often honk their horn or wave.

"I mounted big 10-in. wheels on back of the mower so it rolls easier. I also mounted a rubber flap on back of the mower and installed a plastic chute on the discharge side to keep stuff from flying back up at me. A short chain keeps the mower from doing a wheelie as it comes back uphill."