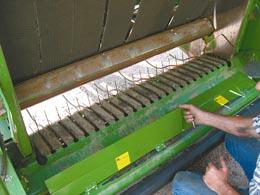 When it comes to hay, Ted Lacey and his son, Andrew, don't like to waste a sprig or leaf. The inventors/builders of the Hay Manager (featured in the 2015 Best of FARM SHOW) also make and sell the Leaf Saver for many models of Deere big round hay balers (models 410 to 569) and Case IH's 8950 baler.

"There's a gap and the hay and stems go into the baler, but the leaves stay on the guards and fall between the rear axle and pickup head," Ted Lacey explains. "The Leaf Saver stops that, 100 percent."

He says that leaves can add as much as an extra 100 lbs./bale harvested under some conditions and greatly add to the relative feed value since leaves have much higher protein levels than stems. That means a fast payback on the $200 the Laceys charge for the two metal plates of the Leaf Saver that mount easily within an hour.