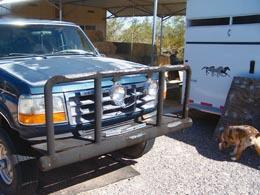 With a grazing lease 75 miles from his home ranch, Lloyd McConnell often needed emergency air handy. His solution was to replace front and rear bumpers with air tanks. Connected with stainless steel line, they gave him a combined volume of just under 40 gal. of air at 150 lbs. of pressure.

"At the time I had the bumpers fabricated, I was ranching in Alaska, and it was really hard on tires," says McConnell. "I had a welder fabricate bumpers for the front and rear of the truck out of schedule 80 pipe. They worked great as portable air tanks."

The rear bumper was a single, large 6-in. pipe with a center hitch and license plate holder. To either side of the hitch, he had 1/4-in. couplings welded in place. One had a quick connect for a standard air hose, while the other had a threaded metal pipe stem for filling the tank.

"All I had to do to fill the tanks was pull into a gas station with a commercial compressor," explains McConnell.

The front bumper consisted of a 4-in. pipe. McConnell added 4 vertical 2-in. pipes with a top cross pipe to serve as a "moose catcher."

Both bumpers were equipped with 1/2-in. plug drains to release moisture. Each tank/bumper also had a top layer of diamond tread, added as a safety step.

McConnell recalls learning just how well built the bumpers were when an accident totaled out his truck.

"A rig came around a curve and was in my lane," he says. "I was pulling a trailer, but managed to turn the front of the truck out of the way. The rig hit the rear of the truck and tore the back axle out, but didn't do anything to the rear bumper."

"I had the bumpers made in 1985, and 30 years later they're still going strong," says McConnell, who has installed the bumpers on several trucks.