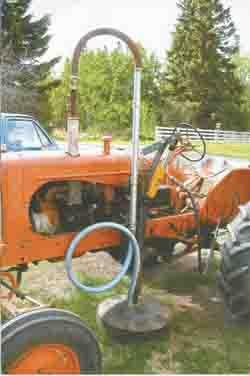 Ron Cole, Clive, Alta., converted his old Allis Chalmers WD tractor into a portable gopher gasser. The unit mounts on the left side of the tractor between the front and rear wheels.

"It's a simple, cheap way to kill gophers and is easy to operate. I never have to get off the tractor seat," he says.

He started with a single, heavy-duty concave disc. He welded a 6-in. high metal "skirt" made from 1/8-in. thick steel around the underside of the disc and bolted a universal joint on top of it. A length of telescoping square tubing attaches to the universal joint and is also connected to a hydraulic cylinder, which in turn is attached to a control lever on the tractor that's used to raise or lower the disc.

A heavy rubber fuel hose runs from a hole cut into the top of the disc to a metal pipe that's clamped onto the telescoping tubing. A flexible metal hose is clamped to the top of the pipe and also to a coupling that attaches to the tractor's exhaust pipe.

"It really works well. Some of my neighbors have even borrowed my tractor," says Cole. "When I spot a new gopher mound, I pull back on the hydraulic control lever to lower the disc over the gopher hole. The universal joint allows the disc to lay flat over the hole and seal it off, regardless of the topography. I let the engine run for about 1 1/2 min. at a fast throttle. Sometimes I'll see smoke coming up from 3 or 4 other holes in the area which means they're all connected together and I can kill all the animals at one time.

"After gassing a hole I seal it by lifting the disc off the ground and driving ahead 1 ft. or so. Then I lower the disc, back up, and drag dirt into the hole. It's a humane way to exterminate destructive pests, and doesn't poison other desired wildlife."

He says the hose that connects to the disc has to be flexible in order to raise or lower the disc. "I used a heavy rubber fuel hose to do the job. I have to be careful that I don't run the tractor at full speed, or the hose will get too hot and start to smoke."