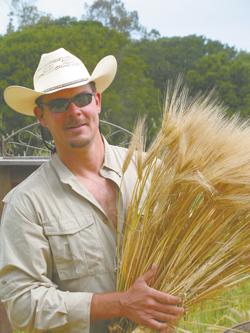 If you're looking for heritage grain lines, Sustainable Seeds Co. (SSC) may have what you need. They offer more than 300 varieties of grain from sesame seed to amaranth to wheat. That's in addition to the 1,400 varieties of vegetables, herbs and flowers they carry. Some of the grains, like Red Clawson wheat, are in such short supply that they are sold in packets of only 25 seeds. Others, like "Streaker" hulless oats, are available in 50-lb. bags.

"We evaluate old varieties for traits to see if they are worth putting into production immediately" says John Fendley, Sustainable Seeds Co. "We may work on some to improve them as we have with Burbank Barley. It hadn't been planted since the 1930's. When we started, it would put out 2 heads per plant. Now we get 15 heads. It took time and a lot of work."

Fendley says the movement back to local production is fueling demand for heritage grains like those offered for sale by SSC. He explains that heritage grains tend to be widely adaptable to local growing conditions.

Most of the varieties SSC works with haven't been grown commercially in decades or longer and are hard to find. He gets seed from the USDA Seed Bank in Idaho, which he describes as "fantastic". Other seed sources include various universities and private collectors, etc.

"Once we got into the business, we started finding people all over the world who would send us stuff, and we send back to them," says Fendley. "We have a guy in Russia who sends us interesting varieties and people in the Mideast, where many of our grains originated, who send seed."

Often there is a long process between getting seed and offering it for sale. In the case of the seed bank, they may only provide 30 to 40 seeds of a rare variety. Fendley starts them in a greenhouse and transplants them to a garden plot.

"We may get 1/4 lb. of seed the first year and then grow it out the second,

"he explains. "If we see traits people will want, we continue to grow it out and offer it for sale."

SSC offers mostly heritage varieties, often from the 1800's. Some varieties are newer, like Lewjain wheat, developed in 1982, yet still rare. It's available only in packets of 25 seeds each, and those are limited in quantity.

"When deciding what to order, consider the end use," advises Fendley. "If the intent is to eat it, then in what" If it's for livestock, what has the highest protein."

He suggests checking with state universities for what varieties used to be grown in the area. Once a variety has been selected, if it's rare, Fendley encourages customers to save back seed themselves to replant.

"We can only grow so many,"he says. "I always recommend saving seed for a rainy day."

If a particular variety adapts well and has good flavor, it may prove popular with local bakers, brewers or livestock producers. Fendley suggests setting aside the highest quality seed for reseeding, the second rank seed for eating and the lower quality seed for animal feed. Some varieties simply may not work out in flavor, yield or other traits.

"We know what generally does well here or there around the country," says Fendley. "However, there are so many microclimates, even within the same county, that you really have to find what works for you. Just try some."

He also recommends keeping abreast of new developments. He notes that the University of Oregon is developing barleys for use in breads and other recipes.

"Hairless barley is the next big thing," says Fendley. "Usually you can only use about 30 percent barley in recipes, but they have a flatbread that is 100 percent barley."