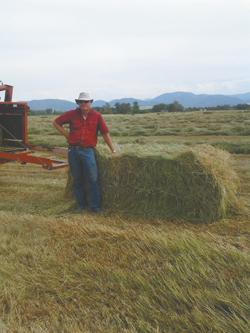 Montana rancher Charlie Siebenga says he's combined the best feature of large round balers "continuous compression " with the benefits of a large square baler to end up with a machine that he thinks could revolutionize haymaking.

"My plungerless large square baler continually compresses hay during the tying process so that baling with this big square baler is a non-stop operation," says Siebenga. "My prototype machine proves that it will work, and at this point it needs to be refined and further engineered so it can be tested under real haymaking conditions for a full season."

Siebenga has worked on his unique baling system for nearly 30 years. "I was with Vermeer in the mid 1980's and we tried to build a continuous compression large square baler; however, it didnt work out. "Siebenga went on to start a successful farm equipment business that he sold a few years ago. In 2012, he started working on his plungerless baler idea again. He removed the plunger from a New Holland model 2000 baler and installed a prototype of his new compression mechanism. He took it to the field and even though a few glitches showed up with the feeding mechanism, he was pleased with the results.

"With this new continuous compression device my baler can move through the field and tie a bale without stopping," Siebenga says. "I didn't alter the needles or the knotter on the baler, so they still work the same way they did with the original plunger." The only difference is that with Siebengas system the hay is continually compressed as a bale is being tied. That concept, Siebenga says, has several benefits for hay producers everywhere.

"With my system I think the framework of a large square baler can be produced with lighter-weight steel components," Siebenga says. "That could reduce the weight of the machine by 30 to 40 percent from the 14,000 lbs. that a plunger baler weighs. With a lighter machine, the cost of producing it would be less. And once the farmer buys it, instead of pulling it with a 120 to 140 hp tractor, the baler could be pulled with a 100 hp tractor.

"The numbers weve run show that we can produce a large bale for about $3 compared to the $5 that it costs with a plunger machine," Siebenga says. "In a 10,000-bale operation, that can mean a savings of $20,000 a year, which I think is real money in anyones book."

Siebenga says his baler will also be better for hay fields. "A lighter baler with a smaller tractor causes less compaction on hay fields, moisture permeates better and re-growth is faster,"he says. Siebenga has a patent pending on his invention and is looking for a company or investor to partner to help bring the machine to market.