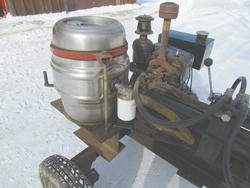 At first glance it appears that Robert Ingerson might be having a little too much "fun" splitting wood. The Russell, Penn., man has a beer keg attached to his wood splitter.

Ingerson laughs that he doesn't drink, but he does have fun building useful things, and the 24-in. keg is there because it makes a very practical hydraulic fluid reservoir.

"It's great because it's stainless steel and has an internal baffle, and it holds a lot of oil, keeping it cool," Ingerson says.

He used a hole saw to make the top hole larger for a cap to fill the keg with hydraulic fluid. He removed the tap and made that hole larger to add a fine mesh screen and plug fitting. Then he drilled a new hole in the side of the keg to add a nipple for another filter.

The 17 hp Wisconsin 2-cycle engine that starts with a hand crank came off an old baler. He made the front wedge out of an old locomotive shaft and purchased the 8-in. steel beam, car axle and tires ("donut" tires) from a local junkyard. Ingerson purchased a two-stage pump, and his son built the fuel tank.

The splitter has a 24-in. hydraulic cylinder for Ingerson to easily split 18-in. long blocks of wood, which fuels a wood boiler to heat his home with in-floor heat.

With a ring on the front hitch for a pental hook, Ingerson doesn?t have to get off the tractor to hook up the splitter on his 3-pt. hitch to transport it.