"Foolproof Way" To Get Rid Of Beavers 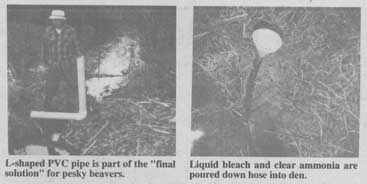 "Beavers cause tremendous problems for farmers and homeowners but they can be among the toughest pest animals to get rid of," says famous "nuisance animal" expert Harold Bailey, known all over the country as "The Friendly Trapper". "I'm excited about this new method for eliminating beavers because it's cheap, easy to do, and it works every time."

Many of Bailey's practical ideas for eliminating pest animals -- birds, bats, rats, raccoons, snakes, insects, and other pests -- have been featured in past issues of FARM SHOW. For a fee, Bailey solves pest animal problems for rural residents within a 100 mile radius or so of his home base in Columbiana, Ohio. He also appears regularly as a guest on radio and TV shows around the country and hosts his own radio show every week that reaches a 3-state area. In addition, Bailey has published a book that contains many of his home-brewed ideas.

When Bailey sets out to solve a pest animal problem, he looks for a solution that will use easily available, cheap materials. He often uses common household chemicals or food products to make "poisons", sometimes experimenting on trapped animals in his garage. For example, he feeds instant potato flakes to rats and mice. When they drink water, the flakes swell up and they die because they can't vomit. Another example: to keep rabbits away from your garden, put Vicks Vapor Rub on 5-in. sticks and shove them into the ground around the perimeter of the plot. They hate the smell, he says.

By trial and error, Bailey has come up with hundreds of other "foolproof" methods. That's how he discovered his new "final solution" for beavers.

Take two 30-in. long pieces of 4-in. dia. pvc plastic pipe and join them together with a 90 degree elbow so they form an "L". Drill a series of small holes along the length of both pieces of pipe. Then dig down into the top of the beaver dam, and lay the bottom end of the "L" within the dam and point the other end straight up in the air. Block the open end of the lower section of pipe with sticks and then cover it back up. Stake the pipe securely.

"Water will leak out of the dam through the pipe and the beaver will go nuts trying to stop it. But they won't be able to figure out what the problem is. Eventually the beavers will go to another location and start again."

But Bailey recommends killing the beavers off for good once the water level behind the dam drops and exposes the beaver den. To carry out this part of the operation, you'll need to make another simple piece of equipment using a 60-in. long piece of 1-in. dia. flexible black plastic pipe, or garden hose. Insert a funnel into one end and plug up the other end (a small section of broom handle works good, says Bailey). Then drill a bunch of small holes along the bottom couple feet of the pipe.

"Cover all exit holes in the den except one. Insert the pipe into this hole and then pack dirt around the opening to seal it. Then pour one pint of liquid bleach and one quart of clear ammonia into the pipe. Stand back from the funnel as you do this and do not inhale the fumes, as they're dangerous. After a bit, pull the pipe out and plug the hole. The beavers inside will never see the light of day again."