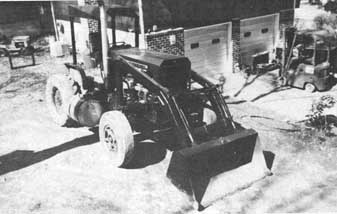 "It's comparable in size to a big Steiger, but without the duals and without being articulated," says Homer Jennings about the big powerful 2-WD tractor his neighbor, Jim Koper, built out of an old semi tractor and trailer that Jennings owned but had not used for 10 or 15 years.

"I hardly recognized my old truck after he got through," says Jennings. "He's a real artist with a cutting torch and welder."

Koper runs a welding shop in Decatur, Tenn. "When I told Homer I was going to make a tractor out of his old semi, he looked at me as though I'd lost my marbles," Koper says.

But seeing is believing. "He brought it over last fall to work about 10 acres of wet ground with an old 12-ft. Deere disk harrow," Jennings says. "It runs like new and makes an impressive looking tractor."

Others apparently agree. "I finally had to park it out behind the house instead of in front of it as a safety precaution," Koper says. "People driving past on the road were always slamming on the brakes, stopping and backing up to get a closer look at it."

The big tractor's built out of a late 1950's Diamond-T cab-over semi and is powered by the truck's original 280 hp, 855 cu. in. Cummins diesel engine, 10-speed transmission, and front and rear axles.

"I had to redo just about everything for the conversion," he says. "For example, I had to pull all the operating controls back 5 ft. from over the front axle. I also had to move the rear 2-speed differential up about 8 ft. to shorten up the chassis so I could make tighter turns."

Koper made a pivoting front axle out of the truck's original 23,000-lb. capacity front axle and direct coupled the differential to the truck's transmission, to help tighten up turning radius. He also geared down the transmission (he won't say exactly how) to better equip it for heavy pulling and lifting. (Top speed of the tractor is still a respectable 50 mph.)

The tractor's rear tires are 16.9 by 24-in. road grader tires mounted on heavy-duty, 3/8-in. plate homemade rims that are designed to handle a lot of weight. Front tires are standard 11.0 by 20-in. truck tires mounted on original rims.

Koper's hydraulic system, which uses a 45-gal. reservoir mounted on the right side of the tractor, operates the 7 1/2-ft. wide by 3-ft. deep front end loader bucket. When fully extended the bucket reaches 18 ft. high.

Koper also built a backhoe with 14-ft. reach for taking out stumps and digging ditches. From the front of the loader bucket to rear of the extended backhoe bucket, overall length of the tractor with attachments is 46 ft., Koper says.

"It has tremendous power. I can even pick up a car using lift forks that mount on the bucket.

"I'd turn it loose for the right price -- it wouldn't be cheap -- then I'd just build another one," he says.