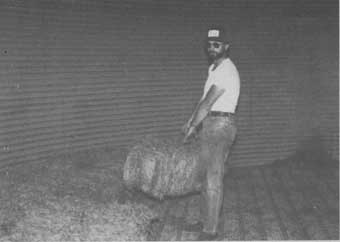 An Indiana farmer who dries hay bales inside his grain bins says it lets him bale hay at a higher moisture content as well as bale high moisture hay that's already been cut but is in danger of being rained on.

John Kruse, of Sunman, dries small square bales inside a pair of bins, 27 and 30 ft. in dia., that are equipped with perforated drying floors and 10 hp electric fans. He stacks bales by hand on their sides two layers deep. Each bin holds 350 to 400 bales.

"It's a good idea, but it's a lot of work and takes a lot of management," says Kruse, who has bin-dried bales for seven years. "I figured that if I could dry grain inside bins, why not hay bales? I place the first layer of bales in parallel rows across the floor. I make the second layer by placing a single row of bales around the outside of the bin and working in toward the center. Cross layering the bales forces air to go through them instead of around them. I place bales on their sides so they dry faster. It takes about 1 hp to dry a ton of hay. The 400 bales weigh about 10 tons so two layers of bales is all my 10 hp fan can handle.

"Most bales go into the bins at 25 to 30% moisture. I start the fan right after stacking the bales to keep them from heating up. Normally I use only air, but I turn on the burner whenever the weather is very humid or when I have to dry bales that have a moisture content of 30 to 35%. The extra heat speeds up the drying process to keep wet hay from molding."

Outside temperature and humidity affect drying time, but Kruse says that it generally takes 3 to 4 days to dry bales with air only and 36 to 48 hours to dry them with heat.

"It costs about the same as using hay preservatives. However, I was never totally satisfied with preservatives because some spots would be missed causing moldy spots to develop on the bales. However, I've discovered it's not economical to dry bales that have more than 35% moisture.

"One potential problem is that the hay causes more dust inside the bin which could cause a fire. I use a centrifugal fan which has the burner outside the fan so it's not a problem, but on some dryer fans you should install a screen across the burner to keep sparks out of the bin."

Kruse uses a 12-ft. long, 15-in. wide roller conveyor to move bales from his hay wagon and into the bin.