(If your subscription is current, click here to Login or Register.)
1977 - Volume #1, Issue #5, Page #27
[ Sample Stories From This Issue | List of All Stories In This Issue  | Print this story  | Read this issue]
«Previous    Next»
Constant-Power Tractor Engines
"Hottest new development in farm tractors for 1977 is the introduction of constant power engines from Cummins. Their impact on the tractor industry will be great. Engines have already been purchased by at least four major tractor suppliers."

It's one of the best new books on tractors we've seen. Here's a "sneak preview" of latest new developments it covers:

New "constant power" tractor engines from Cummins: "Available for the first time in tractors this fall, these 855 Series engines provide better performance throughout the operating range of from 70 to 100% rated engine speed than does any engine found in farm tractors currently offered for sale and Nebraska tested," says Fulkerson. He points out that the new "constant power" engines from Cummins maintain almost constant power throughout the operating range of engine speeds, as contrasted to conventional engines in farm tractors which generally lose power as engine rpm's drop under load.

To compare performance of the new "constant power" engines with conventional tractor engines, he used laboratory data, supplied by Cummins, on the new engines, and actual Nebraska Tests conducted on conventional farm tractors:

"There were 74 2-wheel drive models and 11 models of 4-wheel drives which had been tested and offered for sale this year. The average of these 85 tractors produced 91.03% of their maximum horsepower throughout the 70 to 100% range of operating engine speeds. By contrast, according to Cummins laboratory tests, their line of Series 855 'constant power' engines will deliver 99.36% of their rated power over the same range of engine speed levels. In other words, if the tractor is to be subjected

to loads which carry the engine into the 70 through 100% speed range, then the Cummins series would produce an average over this range of 8.33% more useable power.

"The engines in 4-wheel drive tractors already offer performance closer to what Cummins offers than does the average 2-wheel drive tractor. The average for 4-wheel drive units was 94.84%, contrasted to the Cummins line of 99.36%. Individual models ranged from a low of 83.13% up to a high of 97.98% for the best conventional engine. The lowest of the new Cummins engines produces 98:75%, and the highest produces 100.22% of its power over this operating range," Fulkerson explains.

So what's a "constant power" tractor engine worth to a farmer?

"That'll depend on the nature of the soils, and the terrain on which he farms," says Fulkerson. "Farmers in the flat, sandy soils of the Gulf states may need to look only at the 100% and 90% lugging levels. Those in many other areas will probably look at the full 70 through 100% range because soil formations change so often, and there are numerous hills to be scaled," explains Fulkerson. "We've found that farmers object to having to shift down, or having to raise the tillage tool to get through a tough spot. Their only other alternative with the average conventional engine is to let the engine lug as the load increases, which results in an even greater loss of power, in most cases."

Horsepower gauges: "Cummins will be using them with their new engines. Thus, for the first time, a farmer will know what's going on. He won't have to guess how much power is being produced," says Fulkerson.
New "lugging Power" method for rating total tractor performance. Fulkerson has devised a revolutionary method for rating the "lugging power" of "constant power" and conventional tractor engines. He publishes an annual Tractor Comparison book ant the 1978 edition, slated for publication next January, will rate individual tractors on "lugging power" performance.
This objective, first-of-its-kind rating system promises to turn up some real "eye openers".
For example, two competitive model tractors in the 150 to 180 hp range may show about the same rated horsepower but, when lugged down to 70% of their rated engine speed, there may be 16 hp or more difference in the two models.
Fulkerson, in his just-published book on "Understanding the Modern Farm Tractor," explains how his exclusive "lugging power" rating is arrived at.
"The data is derived from a section of the Nebraska Tests known as the "Lugging Ability in Rated Gears" tests and formerly known as the "Varying Drawbar Pull and Travel Speed with a Ballast" tests. In this series of tests, the tractor is hitched to a drawbar load and the load adjusted until the engine speed is lowered to 'rated engine speed' as recommended by the manufacturer for this model. "The drawbar horsepower, pounds pulled, travel speed in miles per hour, and the slippage rate is then recorded. Next, a heavier load is applied which brings the engine speed down to 90% of rated speed, and the same data is recorded. Subsequent tests are run at 80% maximum load, 70% maximum load, and at lower levels of engine speed to see how the engine reacts to the loads.
"To arrive at our rating, we divide the power produced at the 90, 80, and 70% levels by that produced at maximum rated engine speed. This provides us with the ratio of power that the engine produced at each lower level, to that produced at rated speed. We then multiply this ratio times the maximum PTO horsepower recorded in the 2-hour PTO test to fine the "Estimated Lugging Horsepower" at the 90, 80, and 70% levels. To find average horsepower throughout the four speed levels of 70, 80, 90 and 100% rated speed, we add these four figures and divide by four.
"The only variable existing during these tests is in the slippage rate. While slip rates do vary, we find a uniform increase in this slip rate on the various models as the load is increased.
"We have advised all tractor manufacturers in the U.S. that we will be using this new rating system in 1978, and none have objected to its use. The engineers with whom we have consulted state that this is a substantially accurate method for deriving such data."
Future of farm tractors: "Slippage monitors, slated for introduction yet this year, will allow the farmer to operate tractors more efficiently in the field. As field speed of farm tractors increases, computers may handle such functions as the lifting and lowering of plows at the field ends. By pushing a button at the end of the field, computers may take over to handle many operations which occur too rapidly for an operator to respond to," predicts Fulkerson.
His new book discusses dozens of other subjects, including: Formulas for comparing tractors; tips on dealing with dealers; hydraulic systems; how to boost horsepower; how an engine works and how to select the proper size tractor.
Cost of the book is $5.00.
If you'd like a copy, send your check, made payable to Tractor Comparisons, to: FARM SHOW Followup, Tractor Comparisons, Box 117. Sonora, Ky. 42776 (ph 502 369-2201). 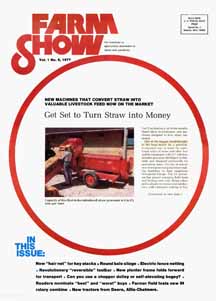