They call their new sheep a fantasy breed

FARM SHOW Magazine » They call their new sheep a fantasy breed
You have 4 free stories remaining.

(If your subscription is current, click here to Login or Register.)
1989 - Volume #13, Issue #5, Page #17
[ Sample Stories From This Issue | List of All Stories In This Issue  | Print this story  | Read this issue]
«Previous    Next»
They call their new sheep a fantasy breed
"They sell themselves. Anyone who sees them, wants them," says Nicki Blackstone, who, along with her husband David and three sons, imports and raises purebred Romanov sheep, a "fantasy breed" that originated in Russia and has earned a fast-growing reputation in the U.S. and Canada.

Nicki says the sheep have "virtually every quality you've ever dreamed of including a high lambing rate of 3 or better, early sexual maturity, the ability to breed all year, out-standing mothering ability, extremely high wool quality, hardiness and many other qualities that make them a delight to raise."

The Blackstones got in touch with FARM SHOW after they noticed a letter to the editor in a recent issue (Vol. 13, No. 3) from a Canadian reader who was excited about a newly acquiredRomanov ewe that had given birth to six lambs at once. The Blackstones wanted to let sheep producers in the U.S. know that the breed, which originated in Russia, is now available in the U.S.

"We imported our Romanovs to the U.S. in 1987, bringing them in through Canada. Now we have 40 purebreds and about 40 crossbreds. It's almost impossible to believe what a wonderful breed this is, especially for U.S. producers because in breeding primarily for meat, we've bred the heart and hardiness right out of our sheep. Domestic breeds in the U.S. average less than 1 lamb per ewe and only about 65% of those make it to market.

"Romanovs, on the other hand, have a lambing rate of over 3 lambs per ewe and almost no death loss. The lambs are very aggressive - they're up and feeding immediately after birth - and the ewes have tremendous mothering ability. They can easily rear up to four lambs each so there's virtu-ally no orphaned `bottle lambs'. They mature early. Both rams and ewes can breed at 90 days and lamb at 8 months. However, we try to keep them apart until about 6 months. They produce twins and tripletts consistently, and quads and quints occur frequently. Our last 7 ewes yielded 27 lambs and they all survived. The most we've had at once is 5 but we know of several 6-lamb births and the breed is known to have produced 7 to 9 live lambs at a time. Romanovs are easy to breed and you can flush and breed them any month, unlike most domestic breeds that only breed in the fall.

"Although most wool sells for about 70 cents a pound, we get $3.00 to $5.00 a pound for our Romanov wool, both from purebreds and from 1/2 crossbreds. Hand-spinners prize it for its unique luster and they say it's extremely spinnable. And although the Romanovs are not as heavily muscled as other traditional breeds, cross-breeding produces a hybrid with better muscling and a better overall carcass."

Nicki says nearly all of the characteristics of the Romanov carry over to the 1/2 crosses. "Romanov-crossed lambs are far superior to anything on the U.S. market. They mature so quickly people don't believe us when we tell them how old our animals are when we bring them to sale barns."

The Blackstones wean their purebred Romanov rams and ewes at 50 days and sell at 60 days. They say there are only a handful of producers in the U.S. and Canada selling stock.

"Romanovs have only been out of Russia for about 25 years. We're planning to bring in new bloodlines directly from Europe in order to meet what we think will be a huge demand in the U.S. in a few years," says Nicki. The Blackstones have been marketing Romanovs aggressively throughout the U.S. and plan to increase their purebred flock to 100 at the same time increasing their stock of crossbred animals. They also raise beef and hogs. 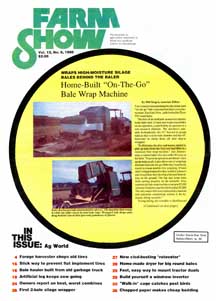