(If your subscription is current, click here to Login or Register.)
2011 - Volume #35, Issue #2, Page #35
[ Sample Stories From This Issue | List of All Stories In This Issue  | Print this story  | Read this issue]
«Previous    Next»
3-Wheeled Geo Metro "Floats On The Road"
"I built it just to see if I could do it, and it worked out great. There's nothing like it on the road," says Randy Hinzmann, who replaced the rear axle on his 1991 Geo Metro with a single center-mounted wheel.

"People can't believe it when they see me driving down the road. They can't see any rear wheels as they approach me so the back end of the car looks like it's just floating above the road. They don't see the car's single rear wheel until they pass me."

He uses the one-of-a-kind car mainly to drive back and forth to work and to run errands, and says the conversion actually has saved him money. "I was able to get the vehicle re-titled as a motorcycle, so I save a lot on license plates and insurance," he says.

He bought the 1991 Geo Metro, which had about 160,000 miles on it, for $150. "The Geo Metro is a front wheel drive car with no driveshaft going back to the rear end, which made the conversion a fairly simple job," says Hinzmann. "The rear wheel just follows along down the road. I just built a new mounting system for the single wheel. I used mostly stuff I already had and didn't spend more than $300 on the entire project."

The Geo Metro has a unibody with no real frame, so Hinzmann had to beef everything up to support the single wheel. "The hardest part was making everything solid enough, because the entire weight of the car's rear end rides on one wheel. Also, I had to find a way to let the wheel move up or down freely. The wheel is mounted pretty far back, behind the car's gas tank which I didn't want to remount, so everything fits pretty tight."

A horseshoe-shaped, 4-ft. wide sway bar off an older Chevy pickup is mounted under the front end of the car. It connects to the car's front suspension arms to keep the car from flopping from side to side.

He also hooked up the car's original emergency brake cable to the single wheel.

"It turned out better than I had even hoped," says Hinzmann. "After I removed the rear wheels, the car looked kind of goofy so I welded in aluminum deck plate to close up the open wheel wells. I also made a single aluminum mud flap that mounts behind the wheel. The tire sits back so far that I had to cut through the rear bumper to make room for it.

"The car is powered by a small 3-cyl. engine so it doesn't go real fast, but getting 40 mpg makes up for any lack of performance. Even with the single wheel, I can take corners at a pretty good clip. The car does lean a little on turns, but then the sway bar takes over and it feels like I'm still driving on all four wheels." 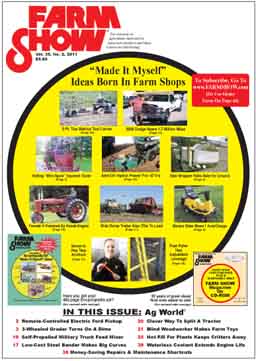