(If your subscription is current, click here to Login or Register.)
2010 - Volume #34, Issue #3, Page #31
[ Sample Stories From This Issue | List of All Stories In This Issue  | Print this story  | Read this issue]
«Previous    Next»
Articulated Garden Tractor Can Pull 3 Bottom Plow
This is no ordinary garden tractor. It can pull a three-bottom plow, turning 30 in. of sod with every pass. Of course, the average 25hp garden tractor doesn't have 250 lbs. of weights added to each wheel either. But then Glenn Peterson's 4-WD, articulated tractor with 12-in. wide wheels is a bit unusual.

"I always wanted to build a full-size articulated tractor, but eventually decided to go with a smaller size," explains Peterson, a retired farmer and electrician. "When I was laid up by an injury two years ago, I figured out what parts I would need and began ordering them from eBay. I got a Deere 318 that was in poor shape and the rear axle from another 318."

Once he was back on his feet, Peterson began doing mock ups of articulating angles with pieces of plywood. Soon he was rebuilding the parts he had ordered and assembling his "new" old tractor. Virtually every part, including the hood and dash, were from 318 Deeres. The exceptions were the frame and the oversize 26 by 12 by 12 wheels that raise the tractor several inches higher than if it was stock.

"I wanted to keep everything in proportion and as close to the original look as I could," says Peterson. "As part of that, I didn't want the engine sticking out in front of the front axle like others have done when articulating a tractor."

To keep the engine centered, Peterson fabricated a frame for the front section of the tractor from 5/16-in. thick, 4-in. wide flat stock steel. He shaped the frame to slope up ahead of the front axle, similar to 30 and 40 Series Deeres, and mounted the spare 318 rear axle as a front drive axle. This allowed him to keep the original 318 rear end intact.

While he fabricated the operator deck and replaced the old seat with a new one, the rest of the tractor ahead of the pivot point was restored from the original 318.

To create the articulation, Peterson used the 318's power steering system and two Cub Cadet steering cylinders (mounted to either side of the pivot point). By creating a circuit through the two cylinders with the fluid running front to back through one and back to front through the other, one cylinder pushes and the other pulls the tractor through a turn.

"Most people use a single cylinder for articulation," explains Peterson. "Using two keeps equal pressure on the articulation joint."

Centering the motor also simplified driving both axles as each could connect directly to the engine crankshaft. For the rear axle, Peterson fashioned a drive shaft with a universal at either end and splined shafts so it could flex as well as extend and retract with articulation.

Both drive shafts run into the hydrostat units on the axles. Synchronizing the hydrostats was a challenge. Peterson ran a heavy-duty sliding cable in a sheath to connect the two hydro levers together. When he adjusted one with his operator controls, the other was in synch, ensuring all four wheels were driving at the same time.

"I read about connecting them with turnbuckles and all sorts of things, but the cable has worked flawlessly," he says.

After getting the tractor running with the original engine, Peterson realized it didn't have the power he wanted. He picked up a burned out V-twin, 25 hp Kawasaki engine, and rebuilt it.

With plenty of power, Peterson wanted to make sure he had traction as well. He loaded each tire with 150 lbs. of fluid and fabricated 100-lb. steel weights to attach to each wheel. Combined with the weight of the wheels themselves, he now had 1,200 lbs. of ballast in the wheels alone.

Peterson then fabricated a grill and weight carrier for the front end. It can hold another 300 lbs. of weight on the front end as needed.

Needing tools to make use of the power and traction, Peterson decided to mount a dirt blade on the front end. He used a stock blade intended for small utility tractors. He designed a unique mount that uses two cylinders to lift and tilt the blade respectively. Both cylinders are tucked up in the frame, and the mount pushes directly off the axle and frame.

Peterson also designed and built a three-bottom plow and an 8-ft. wide digger that folds to 4 ft. for transit. To mount them, he fabricated 3-pt. hitch arms with a quick-attach frame using 1/2 by 2-in. bar steel. He tied the 3-pt. into the frame and used the lift cylinder originally intended for a belly mower.

Again he sought to keep equipment in proportion, both to full-size equipment and the tractor that would use them. In the case of the digger, he even designed it with a self-leveling hitch so the digger teeth would always be level.

"The plow is based on a full-size Deere three-bottom and uses Brimley plow shares and rolling coulters," says Peterson. "I cut notches in the coulters and put cover boards on the plow mold boards like a big plow would have."

The digger has 2 by 2-in. steel tubing running the length of the frame and 1 by 2-in. steel tubing as cross members. The 2-ft. wings use hydraulic lifts and lay flat against the 4-ft. center section. Here too, Peterson used plywood sheets to mock up the pivot points and cylinder placements before cutting the first piece off steel.

"I had the whole digger made out of 1/4-in. paneling," he recalls. "I needed to figure where the teeth should mount in relation to the wheels and to provide nice even spacing."

Early this spring, Peterson pulled his plow into a field. As expected, it pulled easily through cropland, though sod was more of a challenge.

"The tractor was just a bear claw the way it pulled," says Peterson. "I plowed the first time for a couple of hours with no problems. However, the sod didn't roll over as I would like. I need a little more power, perhaps a 40 hp engine instead of the 25."

Peterson has a video complete with words and music that documents the entire tractor building process. It will be available for a small fee to anyone interested in building an articulated tractor.

"I started recording the process when I received the first parts," says Peterson. "You could build the tractor just by watching the video." 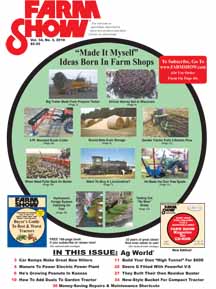