(If your subscription is current, click here to Login or Register.)
2010 - Volume #BFS, Issue #10, Page #40
[ Sample Stories From This Issue | List of All Stories In This Issue  | Print this story ]
«Previous    Next»
31-Ft. "Goat Tower" Keeps Animals Fit, Happy
"Goats love it and people driving by can't believe it," says David Johnson of Findlay, Ill., about his 31-ft. tall, 7-ft. dia. "goat tower" built with the help of the late Jack Cloe, Herrick, Ill. The tower was constructed with 5,000 hand-made bricks, each one a different size and shape. The tower has 276 concrete steps, arranged to form a spiral staircase, that allows Johnson's goats to climb up and down with ease.

Johnson has 34 Saanen milk goats that use the tower. "Goats are the most curious animals in the world so they use the tower a lot. They come and go, passing each other on the ramp as needed."

The tower has six floors made from poured concrete, with three openings on each side. The tower sets on a 10-ft. sq. concrete block set 6 ft. deep in the ground.

Johnson got the idea to build the tower after seeing a magazine photo of another one, located in South Africa.

"As far as I know, there are only three brick goat towers in the world. There's one at the Fairview Winery in South Africa and one in Portugal," says Johnson.

The tower's spiral steps consist of 2 1/2-in. sq., 40-in. long concrete slabs with rerod in them. The steps are cantilevered through a double row of bricks and are about 1 in. apart where they meet the tower, but about 6 in. apart at the ends.

The roof is intentionally steep to keep birds from roosting. It's made out of copper because it's long lasting and, again, birds won't roost on it. He had to use a crane to lift the roof into place.

The roof is supported by wheels that ride on a circular steel rail along the upper edge of the tower wall. "I cut a door into the roof and plan to use a garage door opener to rotate the roof and use it as an observation tower. I might even bring a telescope up there to look at stars," says Johnson.

"People often ask if any goats ever fall off the tower, and I always tell them the answer is no because goats are very sure-footed. Once in a while we do get freezing rain, and then I use a portable torch to melt the ice from the steps."

The concrete floors give structural support to the tower, says Johnson. "About every six months I use a high pressure water hose to blow manure out of each room. It washes out onto the ground, and later I scoop it up and use it for fertilizer on my farm," he notes. 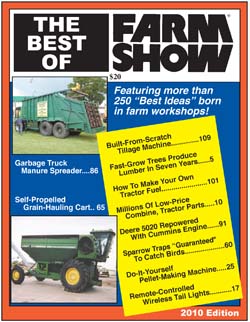