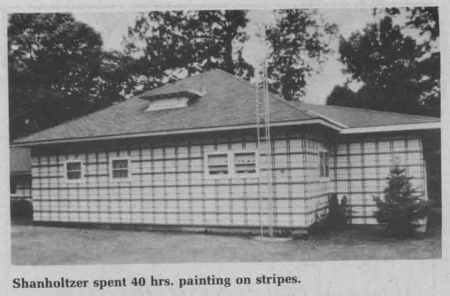 Janet Shanholtzer doesn't like to do things the way everyone else does so, when she and her husband Nyal had to repaint their home in Litchfield, Minn., she decided to give it a newfangled look. Janet painted the house in plaid.

It wasn't Janet's first unusual house-painting experiment. Before her current plaid paint job, the house sported big white polka dots. She says that was nice but plaid is better.

"It's something I've wanted to do for years. I saw a house painted similar to this years ago and have always wanted to try it. We think it looks great," Janet told FARM SHOW.

She started by painting the house a solid light green color, then spent about 40 hrs. putting on the stripes by first penciling in the lines with a ruler and then filling them in with a small paintbrush.

"I was able to get the lines very straight by measuring in from the ends of the walls and measuring down from the top for the large horizontal stripe. People stop by to look all the time and most seem to think it looks very nice," says Janet, noting that the vertical stripes on the house are 1 in. wide and the horizontal line is 1 1/2 to 2 in. in width, painted in dark green.