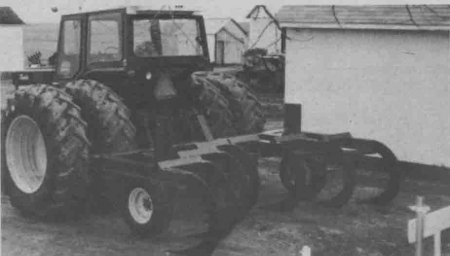 When Gary Moynihan, Fairfax, Iowa, couldn't buy the subsoiler he wanted because the manufacturer quit making the model, he decided to make his own. He built it completely from scratch, except for the shanks, modifying the design and building it heavier than the commercial model.

Mounting the shanks on a 6 by 6-in. toolbar, the entire rig is 12 ft. wide. The 7 shanks are spaced 2 ft. apart and are staggered back in a V-shape to enable the unit to pull easier.

Moynihan mounted the steel shanks on a metal framework that's attached to the toolbar. Angle iron is welded across the top of the parallel arms for extra strength.

Moynihan says there's about 36 in. of ground clearance on the rig and that he can subsoil 20 in. deep. He says, "I designed the subsoiler primarily to break up the badly compacted soil on the end rows of my fields which were hard as asphalt. Yet, I didn't want to disturb the surface trash."

He used the subsoiler on his corn and bean ground last fall and is waiting to see after using it for the first year if yields will increase.