They Pipe Pigs Into The Nursery 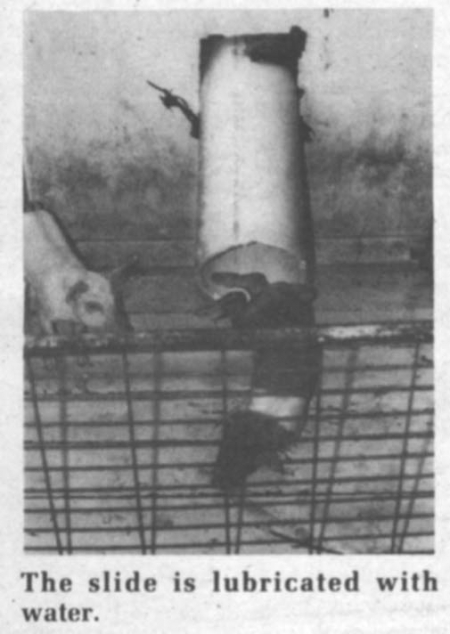 A pipeline is the first form of transportation that pigs encounter on the Bob Sundeen farm near Lincoln, Neb.

Sundeen and his wife Sue installed a 12-in. PVC pipe between their recently constructed farrowing house and an adjacent nursery building. The pipe is sloped so that the pigs slide from one building to the other.

When planning their farrowing house and nursery, the Sundeens wanted a way to keep the two buildings separated for better disease control, while still being able to keep the pigs out of drafts when transferring them from one building to another in cold weather. The pipeline idea seemed like the best solution.

The pipeline has another advantage in that it reduces the cost of equipment the Sundeens needed. Sue can easily push a cart around the farrowing house, collect the pigs and wheel them to the pipeline. In addition, no equipment returns from the nursery that could be a source of infection in the farrowing house.

To make the pigs slide through the pipe easier, water is used to dampen the slide for the first pig. The couple puts the pigs in the pipe tail-first so they can't brace their feet to stop themselves.

The Sundeens are considering a second pipeline to transfer pigs from the nursery building to a new grower building. The grower building will let them move more pigs through the nursery by serving as a transition between the environmentally controlled nursery and open sheds in dirt lots used for finishing.

The Sundeens say they'll use 16-in. PVC for the second pipeline so the pigs can't brace themselves as easily with their backs and feet.

Reprinted with permission from Nebraska Farmer