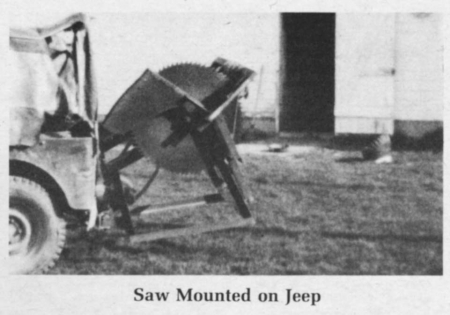 This saw, mounted on a Jeep, was built in a local welding shop in the late 40's in the days when a welder in a farm shop was the exception instead of the rule.

The mandrel, bearings and pulley were bought at Montegomery Ward. The rest of the iron was salvaged from old or discarded farm machinery. One saw was bought at a farm sale, the other from an implement dealer who was quitting business.

I used this saw on my 1947 Jeep until I traded it on my present 1961 model. I kept the same PTO shaft and pulley since they were interchangeable.

The saw fastens on the draw-bar with 2 bolts and can easily be mounted in 10 to 15 minutes and dismounted in less time.

To transport, it is held in a raised position by the two chains ordinarily used to lock up the jeep's tailgate. The saw has been used every year since it was built, and is by no means half worn out.

After owning Jeeps for 35 years and considering the use and service that I got out of them, I would consider them as one of my better buys.