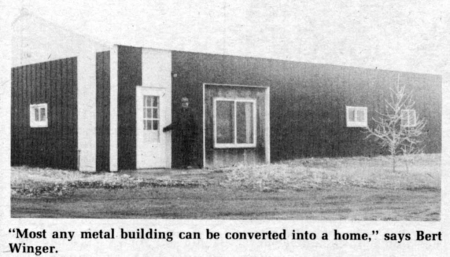 He plans to reconvert the pole house to office space and storage for the Winger's pick-your-own fruit and vegetable farm when his new conventional house is finished.

"It's a great idea for a young couple just starting out or anyone needing temporary housing. Trailer homes can be uncomfortable and can't be used for anything else," points out Winger.

The "homey" MenardS building is 32 by 54 ft. with half that used as living area, and half as garage and sales area for the family's summer operation.

The building's 10-ft. walls, anchored by 6 by 6-in. poles, were studded in with 2 by 4's on 16-in. centers, paneled with rugged cedar, and filled with foam. A chipboard ceiling was suspended with the help of 2 by 12-in. joists running crosswise through the rafters for extra strength. Insulation, 12 in. of it, was blown in directly on top of this.

The entire living area, which consists of a living room, dining room, kitchen, office, bathroom and two bedrooms is covered with rubber backed carpet. Temporary walls separate the rooms so that office space can be arranged in the future.

"If I did it again, I'd put a layer of Styrofoam under the concrete floor to insulate it," says Winger, "and make certain that the building was square when constructed. Otherwise, I think most any metal storage building would make a great home.

The building has electric baseboard heaters. There are several small windows and a large picture window is framed into a conventional overhead door opening.