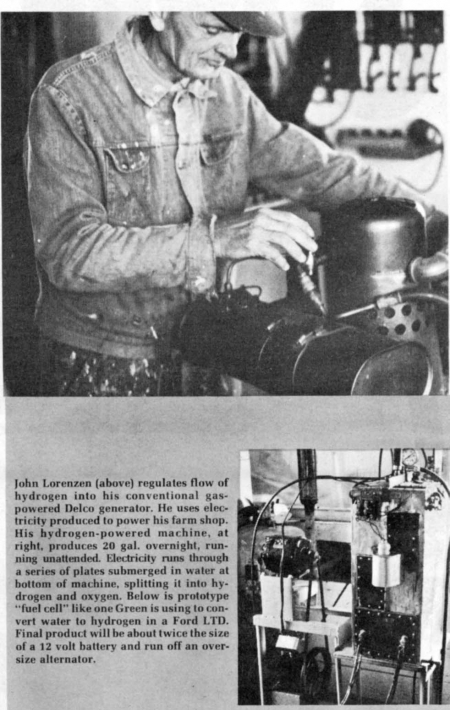 You'll soon be running engines on water, not gasoline, according to two Iowa inventors who already are firing stationary farm engines with hydrogen produced right on the farm from ordinary well water. They say they've also developed a "fuel cell" that allows any car, truck, or tractor to make hydrogen "on the go" as the vehicle travels down the road or in the field.

"I've known for years that hydrogen will burn in conventional engines if there is a safe and economical way to extract and handle the flammable gas," says John Lorenzen, retired farmer from Woodward who makes 20 gal. of hydrogen (under 100 psi) every day with a simple machine he fashioned out of scrap metal. The hydrogen fuel powers a conventional gas Delco generator. Electricity produced by the hydrogen-powered generator powers lights, tools and heaters in Lorenzen's farm shop and machine shed.

Another Iowan, Kenny Green, from Carson, borrowed Lorenzen's hydrogen designs with the idea of developing a commercial unit. He not only has converted a Ford LTD to run on water but is preparing to market a conversion kit to farmers that will fit any car, truck, or tractor. Green says the key to development of his commercial unit "was understanding Lorenzen's experiments. They paved the way."

Lorenzen's hydrogen-making machine contains a series of steel plates bolted together, like lead plates in a battery, and immersed in water. Low voltage electricity running through the plates breaks the water down into hydrogen and oxygen. When enough hydrogen has collected in a chamber above the plates, a small pump moves it into a 20-gal. storage tank and "throws away" the oxygen. The automatic machine runs unattended 24 hours a day and costs virtually nothing to build, except for the pump. It operates off "free" 32-volt current from a windmill generator but, with an inverter, it would run off 110-volt alternating current, says Lorenzen.

He demonstrated how he makes hydrogen for FARM SHOW by taking a bank of steel plates -- just 3 by 4 by 6 in. square with electrical leads to both ends -- and submerging it in a 2-gal. pail of water. The water began to bubble instantly and, after about 10 seconds, Lorenzen made a spark 6 in. above the water. The newly-formed gas exploded like a pistol shot.

Besides burning hydrogen for electricity in the Delco generator, Lorenzen will soon burn it for heat through an LP gas space heater. But the best potential, he says, is in powering farm equipment and automobiles since hydrogen adapts well to conventional gas and diesel engines. But there are problems.

"The trouble with hydrogen is that it's highly combustible and too dangerous to store as a gas in your automobile. Safe storage tanks are possible but expensive," he explains. "So, we decided to let each engine make its own fuel, using electricity off the alternator. You can carry a supply of water and burn the hydrogen you make from it as you go. This eliminates having to store explosive hydrogen in the vehicle."

Using that idea, Lorenzen went ahead and designed a "fuel cell" about twice the size of a regular 12-volt battery which produces enough fuel to run a full-sized automobile. It's powered by a slightly larger than normal alternator. He's now refining the cell, and also continuing his other hydrogen experiments.

Green, who took Lorenzen's fuel cell design and carried it one step further in putting together a conversion kit for car, truck and tractor engines, already has a converted experimental car, a Ford LTD, running to a limited extent on water.

"It's in the prototype stage but the equipment is fairly simple. We expect to have kits available for sale on a limited basis in the near future," says Green. Here's his explanation of how the conversion system works:

"The only parts added to your conventional gas or diesel engine are the hydrogen fuel cell, a larger alternator, pressure valves, gas lines and an LP-gas carburetor.

"You'll climb into your hydrogen equipped car and flip a switch that starts juice flowing from your 12-volt battery to the fuel cell. The instant it turns on you begin making hydrogen and in seconds, have enough to start the engine. As you drive down the road, the alternator takes over, sending anywhere from 12 to 20 volts of current through water pumped into the battery. Pressure valves and special voltage regulators control the amount of fuel produced. We're expecting that a car equipped with the refined system will get up to 100 miles per gal. of water." Green is most interested in converting cars, trucks, tractors, and other equipment belonging to local farmers rather than marketing his kit nationally because of "bureaucratic problems with the Federal government."