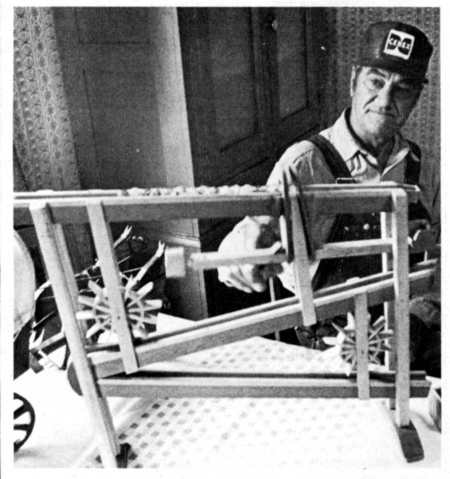 Here's a toy that kids love to play with for hours. It's a hand-made marble dropping machine a retired South Dakota farmer builds in his workshop.

Alex Snaza, Webster, took on the toy making hobby a few years ago when he retired from active farming. He makes a wide variety of wooden toys, most of them of his own design. An exception is the popular marble dropping machine.

"It was designed by a fellow who was in prison in Wisconsin for 20 years," Snaza says. "I didn't have any plans for it -- just looked at one and figured out how to make it."

The toy uses up to 20 marbles which roll down chutes, spin cogs, and finally reach the bottom of the apparatus.

Snaza says it would take longer to draw plans for one than it takes to build one. He turns out all the wooden parts and puts them together just by sight. He's built about 25.

Other toys Snaza makes from wood include old-fashioned cars and trucks, horses, cows, covered wagons, and doll houses with every detail of a full-size house. He works mostly with plywood and uses old rubber belts to cut out tires for the vehicles.

His main tools are a saber saw, table saw and some hand tools. Some parts have to be hand carved.

Snaza's toy-making hobby has earned him a lot of local notoriety, and some national exposure through network television. Along with the fame, his hobby is profitable since his toys are much in demand.