Can You Use A Tin Cat? 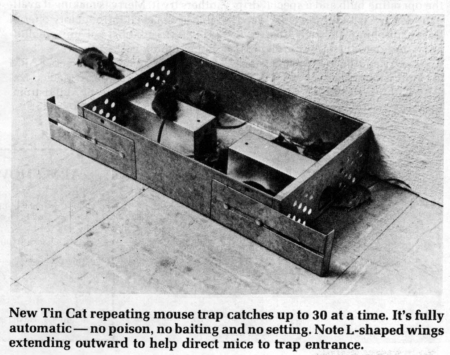 Just as every farm needs a good tom cat or two, it maybe ought to have a few "Tin Cats" -- a new-style mouse trap that uses curiosity instead of cheese to catch up to 30 mice at a time.

Upon entering the device, which resembles a metal cigar box with wings, the mouse automatically walks into a delicately balanced walkway. After a step or two, weight of the mouse topples the walkway, slams the door closed on the entrance to the box, and deposits the mouse unceremoniously into an area at the bottom of the box from which there is no return. Within an instant, the "tin cat" automatically resets itself and is ready for the next victim.

In developing this "better" mass-mouse trap, its designers at the Bloodstream Corp., originators of the famous Victor mouse trap, added an extra feature for those mice who may not be quite as curious as most.

This sneaky feature is a pair of L-shaped "wings", extending outward from the length of the box. "Field tests have shown that mice who ignore the hole in the first place are stopped by the wing, where they then redirect themselves to the area of the trap entrance. Inevitably they end up inside the Tin Cat," explains David Nicholos, advertising manager.