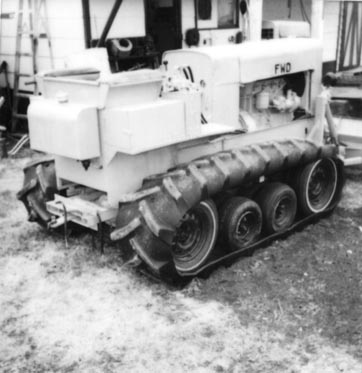 "It's as big as a D-4 Caterpillar and will crawl over almost anything," says Adamson, who used 18.4 by 38 rear tractor tires to make rubber tracks for the tractor. The tracks have 7 1/2 ft. of surface contact with the ground and ride on 4 pairs of dual wheels on each side for a total of 16. The front and rear dual wheels on each side are 13-in. car tires and the center wheels are smaller.

"I've been building things ever since I was 12 years old," says Adamson, a former blacksmith who retired 17 years ago. "It works beautiful and is built so well that most people who see it can hardly believe that I built it. I built it all out of my head without using any blueprints. I use it to grade gravel and dirt and to move snow in the winter. The 4-WD keeps it straight -- even when the blade is at an angle it won't pull sideways if it hits something. Also, it rides nice without the jarring up and down motion you get with steel tracks. In fact, it rides better than my 1993 Dodge Dakota 4-WD pickup.

"I spent about a fraction of what new D4 Caterpillar sells for to build it. I bought some new steel but was able to salvage a lot of used stuff. I bought the 50 hp gas Waukesha engine from a friend. I got the tires cheap at a junkyard."

Adamson used 2 by 4 rectangular steel tubing to build the main frame and 3 by 2-in. steel tubing to build a separate frame at the rear that slides into the main frame and bolts onto it. The seat and gas tank are part of the rear-mounted frame. He welded U-clamps and a nut onto the rear axle and uses a pair of 20-in. long, 1-in. dia. threaded bolts to move the rear frame forward or back to tighten the tracks.

He made the tracks by cutting the sidewalls off each tire, leaving a 4-in. lip on both sides. To mount the tracks, he moves the rear frame up and jacks up one side of the tractor. To hold the tracks in place a row of 3-in. long steel guides inside of each track runs between the dual wheels. The guides are bolted to the track every 6 in.

The 4-cyl. engine is connected to a 3-speed transmission off a 1974 International truck. The transmission chain-drives a jackshaft which in turn chain-drives the driveshaft off a 3-ton Chevy truck that runs between the two drive axles.

"The engine has a lot of power," says Adamson. "It maxes out at 1,375 rpm's and idles at 375 rpm's so it's easy on fuel. It's the same engine used on old United Allis Chalmers tractors. I used 1/4-in. plate steel off a hot water boiler to build the blade. I can angle it up to 45 degrees in both directions by changing the position of a pin on either side of the blade's mounting system. The tractor has live hydraulics. I used the pulley and drive system off a 55 Deere combine and run the pulley directly off the engine crankshaft."