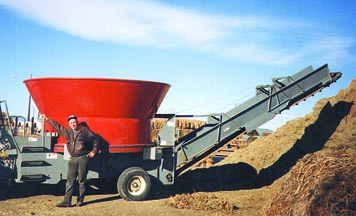 Bob Anderson and his brother Joe started Haybuster Co. in 1966 when they introduced the market's first pto-driven tub grinder. Bob later went on to work for Farmhand Co., demonstrating and selling tub grinders to dealers, feedlots, and dairies.

"I always seemed to leave a tub grinder demonstration telling myself that there must be a better way. So after 25 years of experience with tub grinders I decided that I could build a better one," says Anderson.

His patented new "Tophand" tub grinder breaks the stems without turning the leaves into dust. The pto-driven machine has no screens and works much like the cylinder and concave inside a combine. It also has a heavier-than-normal hammer that runs only 50 to 60 percent as fast as hammers on conventional tub grinders. An auger located next to the hammer mill pushes chopped material onto a belt-type discharge conveyor at the back of the machine.

"The cylinder and concave action, combined with the low hammer speed, allows it to break the stems without beating the leaves into dust. It makes a coarse-ground, more digestible feed that results in better animal health," says Anderson. "It cuts hay stems at least 1 1/2 to 2 in. longer than conventional tub grinders do. If the hay is put up in prime condition with low moisture leaves, the leaves will be left whole and hanging onto the stems when they come out of the machine. In dry hay it has about the same capacity as a conventional tub grinder. However, because of the design in wet, tough hay it has much higher capacity. I've used it to grind 30 percent moisture, first-cut alfalfa that would plug up most traditional tub hay grinders right away. I think it could even be used to process silage bales, although I haven't tried it on them yet.

"The problem with conventional tub grinders is that they try to pound wet forage through a screen, which gets plugged up. The hammers keep beating the material around and around so that it acts like a brake on the hammer mill and causes it to get hot. It can even tear out the tractor pto. Another advantage is that the machine requires less power to operate. The 1,000 rpm pto direct-drives the hammer without the need for a gearbox to increase the hammer speed. That results in less vibration and fewer mechanical problems. The machine has only about half as many parts as a conventional tub grinder.

I've used it to grind hay for local dairy-men for more than one year. They all say they like it," says Anderson, who expects that the machine, if manufactured, would be comparable in price to a conventional tub grinder. He's looking for a manufacturer.