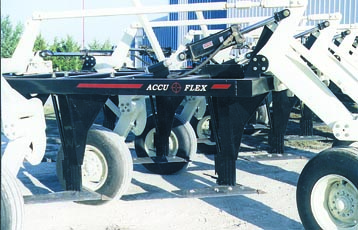 "It lets me work up the ground with precise depth control at high speeds and plant or apply anhydrous or liquid fertilizer at the same time," says Kelly McNichols, Burr Oak, Kan., about his home-built "super flex" tillage tool that's designed to always follow the ground contour, even on terraces and hilly ground.

The "Accu-Flex", as McNichols calls it, was designed by McNichols' friend Herb Jeffery. It's built in a series of 5-ft. wide sections that are joined at the front by 30-in. long flexible "tie bars". Each tie bar connects the center of one section to the end of the adjacent section and serves as a pivot point, allowing all sections to flex and twist independently. The front of each section is free to flex up or down via a series of ball joints. Each section is equipped with "shallow draft" sweeps that mount on hollow shanks set 20 in. apart. Tillage depth is controlled by a single hydraulic valve. Three sets of fertilizer tubes mount inside each shank and exit under the sweep, allowing application of an-hydrous ammonia or liquid fertilizer. A seed tube mounts behind each shank.

The back of the implement is equipped with press wheels that mount on 5-ft. wide gangs.

McNichols' rig is 36 ft. 8 in. wide and consists of seven sections. Last spring he used it for the first time to plant wheat, pulling an 80-bu. Gandy Orbit Air air seeder behind the rig and planting in 10-in. rows. (The seed tubes are split at the back of each shank). The 4-wheeled air seeder was mounted on the frame of an old gravity flow grain wagon.

"I can use it alone as a primary or secondary tillage tool, or pull an air seeder or fertilizer rig behind it. It eliminates the need for a separate field cultivator, chisel plow, fertilizer applicator, planter, and drill. The only other tillage tool I still use is my disk. As a result my total investment in machinery is only about 20 percent of what it had been. I can apply anhydrous ammonia in a separate operation with the same tool. Or, I can pull a liquid fertilizer tank behind the air seeder.

"Jeffery used computer aided design to engineer the unit. We also built a unit for Jeffery, who has used it for two years to plant wheat, soybeans, and milo. He has planted at speeds as high as 7 to 9 mph with no negative affect on seed germination levels. Most farmers get nervous if they go over 5 mph with a planter, and grain drills generally are limited to about 6 mph. Faster speeds cause the openers to throw too much dirt over the seed. Some double disc drills will go faster, but they have a lot of wear points.

"There are three reasons we can plant at such high speed. One is that each section is free to pivot up or down about 6 inches, allowing the sweeps to work without gouging or coming out of the ground. Another is the shallow draft of the sweeps, which keeps them from throwing a lot of dirt. The third reason is the design of the seed tubes. The bottom part of each seed tube is bent back away from the direction of travel, allowing soil to fold around the tubes and cover the seed without allowing it to bounce around. The lower 6 in. of each seed tube is replaceable depending on whether we want 10 or 20 in. spacing. We set the seed tubes on 20-in. centers for milo and soybeans and 10 in. for wheat. By changing the position of two bolts we can convert the press wheels to either 10 or 20-in. spacing.

"Last year we planted 170 acres of soy-beans in standing milo and it worked great. This year I may even try using the Gandy air seeder to plant corn. The company is developing a corn metering delivery system that singulates the seed much like the old Inter-national Cyclo planters. Last year Jeffery's nephew used soybean metering wheels on the Gandy air seeder to plant corn in test plots."

Each press wheel gang can be removed by pulling two pins and sliding the gang backward. A harrow assembly can be installed in place of the press wheels.

The rig folds to a transport width of 16 ft. 3 in. (There's one extra shank on the center section so the total width is not a 5-ft. multiple).