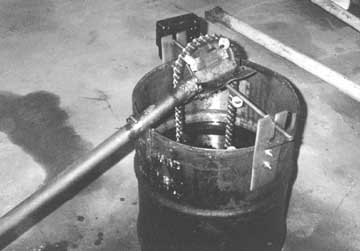 For years, Roger Bennett heated the shop on his father's farm with a two-barrel wood stove. But wood is a rare commodity in his part of South Dakota and they always had gallons of used oil from tractors, pickups and other equipment on the farm.

He decided to find a way to burn it up. What he came up with is a simple metering device that lets him burn oil in the same stove. Best of all, he made the conversion using scrap parts and a bunch of plastic pop bottle caps.

He started with a 30-gal. drum which is filled with oil. On top of the drum he mounted a 1/2-in. shaft with bearings on either end mounted on wood blocks. At the center of the shaft is a 6-in. roller chain sprocket. A loop of roller chain hangs from the sprocket, with the lower end dangling loosely in the oil. Next, Bennett attached several caps from 20-oz. pop bottles to the chain.

"I wired them to the roller chain so they act as little buckets for dipping up oil. They provide a slow, steady supply of fuel to the stove," he says.

A rotisserie motor from Wal-Mart powers the shaft, which turns the sprocket and chain. When the bottle caps reach the top, they dump oil onto a tray that leads to a pipe which trickles fuel into the stove.

In the burn chamber is a burning pan, which Bennett made from a piece of 10-in. channel iron cut to the length of the stove. He welded a piece of iron over each end to make an enclosed pan. Oil simply runs into the pan.

On the opposite end of the barrel from the oil inlet, Bennett mounted a small salvaged squirrel cage fan. A light dimmer switch controls the speed of his intake fan. The faster the fan runs the greater the mix of air in the oil as it's sucked into the burn chamber.

"When oil enters the combustion chamber, it basically vaporizes and then burns. As long as there's oil in the barrel and the fan continues to run, the stove puts out a consistent supply of heat," he says. He can regulate the heat output by adjusting the speed of the fan and adding or removing bottle caps. Spacing of the caps on the chain doesn't have to be exact since they empty into the pan reservoir rather than directly into the stove."

He figures the stove consumes about half a gallon of waste oil an hour, and, at that rate, provides plenty of heat for his shop.