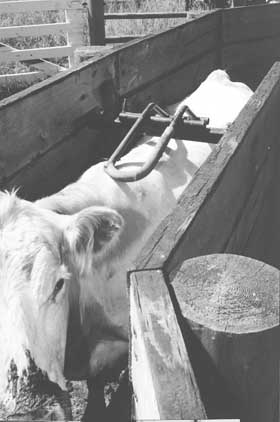 In the short-term, it may seem cheaper and easier to slide a fence post across alley planks as a make-shift cattle-spacer, and this is what most cattlemen have done over the years. However, there is a gadget on the market that's much safer, more convenient and less stressful for the cattle and operator.

Dave Stoneman and Todd Mazur of Fisher Branch, Man. collaborated to create what they call simply, "The Livestock Tailgate," a device that silently and safely improves cattle flow through the handling system. It prevents them from backing up in the alleyway.

Once installed, the relatively small, see-through mechanism saves labor by doing its job automatically. There's no need for manual blocking of cattle. Animals are no longer spooked by the person trying to hold them in the alley using the old pole method.

Stoneman is an experienced cattleman who has worked with cattle all his life. He came up with the idea for the tailgate in January, 1997 and enlisted the help of Todd Mazur who operates a local welding shop. The two worked together to refine the idea and built some automated equipment for punching and bending the devices. What resulted was a simple tool that can fit any type of wood or metal alley (or chute) measuring 20 to 36 in. wide.

"The tailgate is mounted at the height of the animals' backs so that when they approach, they lower their heads and push up the U-shaped, rubber-covered bar," Stoneman explains. "The bar is held up by their backs until they pass through and then it falls silently into place, preventing them from backing out. Because it is counter-balanced, the device actually applies pressure to the cow's tailhead and encourages her to move forward before it drops down behind her."

Because the device is open and "see-through", it doesn't intimidate the cattle, and they can't get stuck in it even if they slip while passing underneath. It can be locked in the open position if the need arises to back cattle through the alley.

The entrepreneurs recommend that the first Livestock Tailgate be positioned one animal length back from the squeeze. The second should be 3 to 4 ft. inside the beginning of the alley where the cattle first enter.

Because the mounting brackets swivel, there are 16 possible combinations to mount the tailgate to an existing cattle handling facility. This makes it possible to mount the unit on vertical posts (wood or metal) or horizontal planks (rails or pipes).

So far, the pair has sold about 250 units, but is slowly building a stronger following as they sign up dealers.

"We're looking for more dealers in both Canada and the U.S. and we will also sell direct if there is no dealer near by," Stoneman says. "The tailgate comes with a powder coated durable finish and a lifetime guarantee. If installed correctly and it ever breaks, we will replace it but that's not likely. Our farm operation has run more than 5,000 cattle through it and it's just like new. It's maintenance free since there's nothing on it to wear out."

The Livestock Tailgate is also being used on dairy farms where cows travel through alleys leading from the loose housing barn into the milking parlor. Dairymen have found the device useful for preventing cows from blocking the parlor exit alley by entering it from the wrong end.