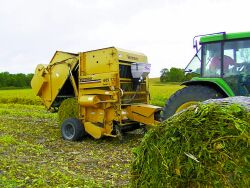 When Chris Nelson, Menlo, Iowa, looked over a short stand of low-yielding soybeans last year, he began wondering if they wouldn't be worth more as feed for his father's beef herd than if harvested normally.

Because it was a no-till field that we had drilled into sod, they were shorter than our other beans and not as mature as we got close to harvest time. I started looking into the nutritional value of soybean forage,  says Nelson.

A senior at West Central Valley High School, Nelson put together a science fair project in which he compared the value of ensiled soybean bales with ensiled alfalfa bales and dry alfalfa hay.

He cut and windrowed soybeans with a MacDon windrower. When the moisture content had dropped to 60 to 70 percent, he baled the crop in large round bales and wrapped them in airtight plastic.

One of the first things he noticed was the volume of the crop.  We harvested more than 10 tons of forage per acre in just one cutting,  he says. That was more than twice the average for the Nelson's hay crop that year.

He selected 15 calves from the family herd and put five on each of his three forages for a 20-day test.  Dad was a little concerned about putting good calves on the soybean silage,  he admits.

Dry hay was the cheapest feed. Alfalfa balage was the most expensive. Baled soybean silage cost somewhere in between.

From this study, Nelson concluded that soybean silage is economically sound and nutritionally comparable to hay or haylage.

And the study had additional benefits for Nelson. It took him all the way to the International Science Fair in Louisville, Kentucky. During the course of the competitions, he amassed scholarship and award money.

He's now a freshman at Iowa State University, where he plans to study agricultural engineering.