Mustard Foam: New Weapon In The War Against Gophers 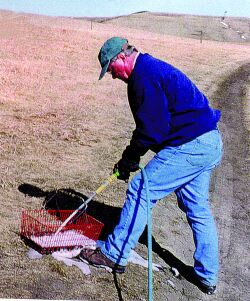 Don Sutherland tried everything short of explosives to reduce the number of gophers on his ranch and 10-acre homestead. Nothing worked. Not poisons, electrocution, traps, or even shooting. As fast as he took out one gopher, another moved in.

Soap foam would fill the tunnels and put gophers to sleep, but it didn't kill them,  he explains.  After about 15 minutes, they would be as good as new.  So Sutherland started trying different additives in the foam - everything from chlorine to cayenne. He finally found one that worked: dry mustard powder.  Once we found the right percentages, gophers were unconscious in one minute and dead in three,  says Sutherland.

The treatment is non-toxic to the applicator and the carcass of the pest is safe for predators to eat. Treatment is fast and easy, taking only seconds per burrow. A plastic cone is first inserted into each gopher hole. Then foam is injected through the cone under high pressure. The specially designed cone directs foam down throughout the tunnels, filling every space and lasting for two to four hours. Gopher holes are then filled in with dirt.

After clearing his 10-acre farmstead and a buffer strip on the surrounding ranch land, Sutherland decided he might have a valuable idea. He received permission to test his system on a park in the nearby town of Cochrane. Results were excellent, but officials told Sutherland he needed environmental approval for his process, which could take several years.

He went ahead and was granted unusual  reduced risk  fast track status by both Canadian and U.S. regulators.

The chairman of the U.S. EPA review board said it was the first time fast track had been granted without a complete data package and with complete board endorsement,  he says.

Sutherland licensed the process to a manufacturer who carried out and funded the hundreds of thousands of dollars in tests needed in both countries. Results were positive not only on gophers, but also on ground squirrels and Norway rats, which burrow around foundations of buildings. The process is on track to be approved in early 2003. A company called Exit Holdings has been set up to handle distribution.  In the U.S., it will be marketed as VARGON and in Canada as EXIT,  explains Sutherland.  It costs less than any other control agent now in use and is 97 to 100 percent effective.