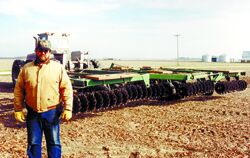 Brent Pitcher wanted a fall tillage implement that would do a better job cutting through corn stalks without leaving the field as rough as a conventional disk. That would allow him to plant no-till beans the following spring without any further tillage. So he bought a used 28-ft. Deere disk cheap at an auction and converted it to ripple coulters.

"I tried it for the first time last fall on about 300 acres and was pleased with the results," says Pitcher. "The ripple coulters do a much better job of cutting up corn stalks and mixing trash with the dirt than straight coulters. They left the field smooth enough that I should be able to plant directly into it this spring. It takes at least 180 hp to pull it. I use either my Case-IH 7120 Magnum or White 4-210 and go about 10 mph in the field.

Pitcher welded new angle irons onto the disk frame so that all the gangs run straight across instead of at an angle. Then he bolted the original coulter-holding assemblies to the angle irons. The gangs are staggered so that the front coulters run between the ones on back.

The 1-in. thick weights that he added came off oil well pump jacks and measure 22 by 28 in. Pitcher placed them together in pairs and bolted them on top of the disk's wings and center section.

"My ripple coulter implement still leaves some standing stalks which I don't think will be a big problem. However, I may add a chopper reel behind the implement to help knock the stalks down," notes Pitcher.