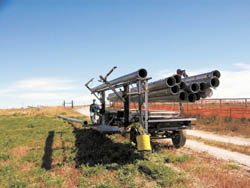 A self-propelled rig designed and built by Larry Fulton, Cheyenne, Wyo., lets one man lay down gated irrigation pipe and pick it up again without ever getting out of his seat.

Fulton isn't a farmer and had never worked with gated pipe before building the pipe layer. While visiting his brother-in-law's farm, he saw a need and came up with a solution.

"We were eating lunch outside by a pile of pipe," recalls Fulton. "I asked my nephew how he liked gated pipe, and he said fine, but layout and pickup was a hassle."

A 30-ft. length of 10-in. pipe can weigh nearly 200 lbs. Over lunch, Fulton came up with an idea of how to make a machine to do the job. His brother-in-law said he would cover the costs if Fulton would build it. Sixteen months later, a prototype machine was ready, and he applied for a patent.

Developing a way to hold groups of pipe was the first step in the process. He designed cradles made from 3-in. pipe. The frame underneath holds the gated pipe off the ground while the four uprights hold them in place. All corners are rounded, making the carriers easy to move around.

To build the pipe layer itself, Fulton used an engine, transmission and differential out of a front-wheel drive Ford Contour. He built the frame and nearly all the components out of scrap steel. A Massey Ferguson combine supplied the drive wheels and the hydraulic steering for a front-end pulled off an old Ford F600.

"I cut the axles off the Ford Contour and attached the drive to a gear reduction jack shaft that connected to the combine axle," explains Fulton. "I used a slip collar to tie in disc brakes on the combine drive wheels. The combine had individual steering brakes, so it had individual cylinders for the disc brakes."

The pipe layer is built to handle the 30-ft. pipe. The driver sits to the rear and just to the right of center. A set of hydraulic valves controls nearly all aspects of the pipe layer.

"To load the machine with a batch of pipe, you simply drive alongside a pipe cradle and lay the left hand arms down to the ground, hook cables onto the cradle, and winch it up and over the arms," says Fulton.

A hydraulic pump and reservoir Fulton found laying around the farm powers all movements of arms, winch and other components as well as steering and brakes.

The transfer arms are attached mid height on the upright legs. As the operator lowers the transfer arms, the pipe rolls off the receiving table and is lowered with the arms to the support table.

Once on the support table, the operator can reach over and adjust it so the gates will be in the right position as they slide off the table onto the ground. The operator also pulls the first pipe most of the way off the table. When the second pipe comes off the arms, it is adjusted into place and clamped to the first, whether with a friction coupler or clips.

"Once the pipes are attached, as the operator drives ahead, they slide backwards to make room for the next pipe," says Fulton. "To pick up pipes, the process is reversed."

The end of the pipeline is picked up and placed on the support table, and the operator backs up until he reaches the first coupling. Once the first pipe section is free, the arms are swung down to pick it up and returned it to the receiving table and then into the cradle.

Fulton has not priced out off-the-shelf components that he says could be used to build the gated pipe rig. Once he has received his patent, he hopes to find a company or individual interested in building the rigs for sale.