They're Doubling The Value Of Their Soybean Crop 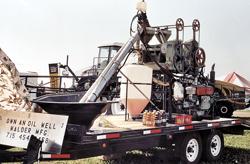 "In an 8-hour day, we can produce 55 gal. of soybean oil and 3,000 lbs. of very high-quality protein meal, while burning just 5 gal. of biodiesel to drive the presses. We're doubling the value of each bushel of beans," says Mark Walder, Wittenberg, Wis.

He and his brother, Ed, and father, Dan, experimented for 6 months to come up with a unique two-press biodiesel system that worked so well they're offering a turnkey system to other farmers. They recently demonstrated it at the Wisconsin Farm Technology Days near Oostburg, Wis.

"We needed another source of income. This system not only produces fuel we can use on the farm, it also makes a 46 percent protein supplement that's better than the supplements we used to buy," says Walder. "In the past, we sold our beans to a local co-op at a wholesale price and then bought back meal at a retail price. Meanwhile, the co-op took the oil out of the beans and, to get biodiesel, we have to buy that back at retail prices, too. What's wrong with this picture?"

The Walders' system is unique in that it uses not one but two presses. "As far as I know, no one else uses a second press when making biodiesel fuel. We need the second press to heat soybeans to a higher temperature than is possible with just one press, which results in meal with a much higher protein content. Also, the second press allows us to extract more oil from each bushel of beans than we could with one press," explains Mark. "The first press squeezes out 55 percent of the available oil, and the second press gets the rest. Another benefit of using two presses is that it eliminates the need to dehull the soybeans."

The Walders bought a pair of Chinese-built, 2-ton screw presses from an importer in Oregon. A slow speed 1,750-rpm Listeroid 22-hp diesel engine -- which runs on a 70-30 mix of soybean oil and kerosene -- belt-drives both presses.

The engine also belt-drives a hydraulic pump that powers a pair of hydraulic motors that are used to operate augers.

A water jacket around the 4-in. auger from the gravity box to the press heats up the beans to 90 degrees. Hot water from a heat exchanger around the engine is pumped through the water jacket. The meal comes out of the first press at about 160 degrees and is augered into the second press, where it exits at about 230 degrees. The Walders get about a gallon of oil out of every bushel of beans.

"Pre-heating the beans results in an extra 3 to 5 percent yield of oil," says Walder. "We've experimented with other oil crops as well. Canola yields about 2 1/2 gal. of oil per bushel and sunflower seed almost 3 gal."

Exhaust from the engine is blasted over squeeze plates on top of the press, in order to keep fines out of the oil as it's squeezed out. "We made a heat exchanger in there. We're using the exhaust to heat plates inside the screw press and clean them," says Mark.

Oil from both presses squirts through the plates, hits a metal catch pan, then drops into a large fiberglass tank.

As meal comes out of the second press, it's moved into an aluminum auger where it cools down before being augered into a gravity wagon.

"We started putting the system together last November but didn't get it working until March. We think it has a lot of potential and we're now ready to offer systems to other farmers," says Mark.

"So far we've used the oil in our skid loader, tractor, and self-propelled forage chopper. We run a 50-50 mix of soybean oil and no. 2 diesel fuel. We plan to use 50 percent kerosene and soybean oil during the winter.

"A feed consultant told us that heating the meal to 225 degrees or higher results in a super bypass protein test. He says the meal's bypass protein content is as good as if we had roasted the soybeans, although roasted soybeans will have more fat because fat is oil and we're getting rid of most of the oil."

Mark says they plan to build a bigger biodiesel system and custom-produce fuel for area farmers. "There are many ways to look at the economics of this. For example, maybe the customer will keep the meal and we'll keep the oil."