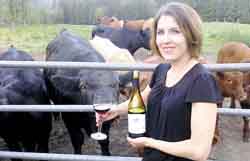 Due to a little something extra in their afternoon ration, some beef herds in British Columbia's Okanagan wine region have a distinct smell.

"You can always smell which pen is getting the wine. They smell like a bunch of winos," laughs Janice Ravndahl, who came up with the idea to feed beef cattle wine a couple years ago. A television chef who fed beer to a pig inspired her. Living in the heart of wine country, with her husband working for a winery, she wondered what effect wine would have on cattle.

After experimenting with rations, she and her beef producer brother, Darrel Timm, believe that wine-fed beef has enhanced flavor, is more tender with finer marbling, and has sweeter tasting fat. They call their operation Sezmu Meats, named after the Egyptian god of the wine press. Their goal is to brand Sezmu as a high-quality beef.

Though university and nutritional studies have just begun, regional chefs praise the texture, flavor and tenderness of the meat and say that it's recognizably different, starting with the dark red color.

"It's more tender and more forgiving in cooking, it remains tender," Ravndahl says. "The burgers are fantastically juicy. My kids notice the difference right away."

She and her brother first experimented with wine they made themselves to feed his Angus herd. After adding the wine to the diet for the last 30 days before going to market, the cows didn't make the grade they had hoped for. But they could see changes in the meat.

They upped the wine ration to 90 days, using the sediment-filled wine that's filtered off at local wineries and generally used for fertilizer or thrown away.

The beef was dry-aged for 21 days and taste-tested in April 2009. With support from chefs, Ravndahl began the complicated process of marketing to consumers and finding ways to get extra value for all parts of the animal and not just the choice cuts. Sezmu beef is served at high-end restaurants in British Columbia as well as in hamburgers at other restaurants.

Her brother's herd is raised on pasture until the cattle are close to finishing. Then they are sent to a feedlot. When they are in their final 90 days they are given about a liter of the wine residue with their afternoon ration.

"Wine is antimicrobial so it helps reduce E. coli in beef," Ravndahl says. There seems to be a reduction in methane, and the herd has a different smell. Steers also seem to be more relaxed.

Retail prices for the meat run about 10 percent above organic beef prices.