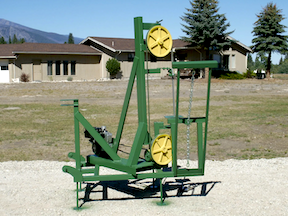 Pat Burrington says using his portable 3-pt. tractor-mounted bandsaw in the woods to cut firewood is a lot quieter and more efficient than running a chain saw. With this rig, I can cut much smaller pieces into kindling and get more wood out of a downed tree. I can take a log or branch and saw it while standing upright like Im working on a raised table. The cut pieces go into my ATV cart and the brush goes into a burn pile.

Burrington says he built the portable saw because his back was getting tired from constant bending while using a chain saw, and he was leaving too much usable wood for scrap. I just wanted to be done with the chain saw and all that bending, he adds.

Framework for the saw is made out of scrap iron from Burringtons metalwork shop. I made a main frame out of channel iron with a 3-pt hitch for the front so I could haul the saw with my tractor, Burrington says. Hes used it on several smaller horsepower tractors and says it works fine on all of them.

The main horizontal beam holds a 4-hp. Briggs & Stratton engine on one side and supports the center-mounted vertical pulley pole. A small metal platform at the base of the upright holds the gearbox and a bracket for the lower blade pulley. The top idler pulley is mounted 48-in. up on the center upright with a guide platform in between. Flat metal bracing keeps the setup sturdy.

The whole idea was simple, Burrington says. I bolted the engine to the frame so I can keep the v-belt that drives the gearbox tight. For the 1-in. 10-12 TPI blade, I used two 12-in. pulleys. The bottom one drives and the top one spins and has a blade tensioner. The blade guides are some inexpensive bearings. I bought four saw blades online and it was pretty much done, Burrington says.

Using this saw Im amazed how much more kindling and small diameter wood I can get from a tree compared to a chainsaw. I have a chain supporting the cutting platform so Im always standing and cutting. With the chainsaw, Id get tired and leave small branches, and now thats usable wood. I built the saw over one weekend 8 years ago for about $600, but that would be considerably more now with more expensive materials. Its been a great investment without any problems.