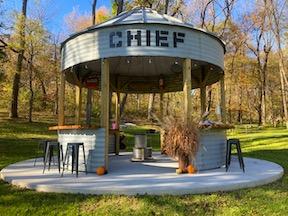 Jamie Dougherty can entertain friends and family even in the rain. His grain bin gazebo provides shelter from sun or rain with its overhanging roof and bar/counter that wraps around the roof supports.

My girlfriend saw one on the internet and showed it to me, so I started looking around for old grain bins, says Dougherty. A friend of mine recently purchased a farm with several old bins he wasnt going to use and gave me one.

He retained the top ring and the roof from the 18-ft. bin, which he picked up with a telehandler. Once on a trailer, Dougherty and his son hauled it the 20 miles home.

Moving the roof and top ring was the biggest challenge, followed by setting it in place, recalls Dougherty.

Dougherty had an ideal site for his new gazebo. A concrete pad with a wire corn crib on it also had several inches of gravel laid around it.

I got rid of the crib and the pad, and the gravel provided a good base for a new and larger concrete pad, says Dougherty. I made the diameter 5-ft. larger than the bin to accommodate seating inside or out and 10-in. thick for support posts.

The concrete was the biggest expense. He anchored eight 6 by 6-in. support posts to it and added 4 by 6-in. braces to each post. The braces were cut at an angle on a compound miter saw to fit the round roof. He also ripped them slightly to avoid hitting the top ring.

Dougherty anchored shorter 6 by 6-in. posts in between the support posts and connected them with 2 by 6-in. boards set on edge. These formed the base for the countertop made from live edge cedar slabs a friend had cut out years before but never used. Dougherty cut them 2 1/2-in. thick and 26-in. long. They were random 4 to 10-in. widths.

I pieced them together as tight as I could while following the curve of the bin, says Dougherty. I intended to use log cabin chinking in between. However, after it rained, I noted how well the counter drained and decided to leave it.

He also left the roof cap in place. He thought it would need to be open to accommodate smoke from a Breeo Smokeless Fire Pit set in the center of the gazebo. Leaving it closed kept the gazebo warmer and he found the smoke drifted away under the edge of the roof.

Dougherty finished the gazebo in time to entertain guests this past fall. It was also in time to be tested by 70+ mph winds in December.

It made it through the big wind without a problem, says Dougherty. I tried to keep it low cost, but I tend to over-engineer everything. This time it paid off.