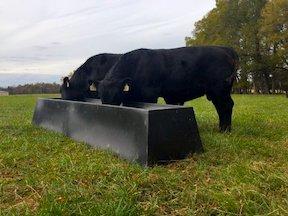 When Travis Graves, owner of AmeriAg became fed up with cattle feed bunks that either rusted out or were poorly designed, he decided to create his own.

I got tired of cattle, and especially bulls, easily turning over other bunks that were designed top-heavy, says Graves. My bunks are wedge or trapezoid shaped to prevent turnover. Because theyre wider at the bottom, cattle arent as likely to try and jump over them. They have to stand back a little farther when eating.

AmeriAgs bunks are manufactured and molded with double-walled polyethylene in their Burlington, N.C., shop. No metal is used, so rust and corrosion are never a problem.

A really nice feature of the bunks is we put in a threaded drain plug all the way through both walls to easily convert it into a water trough, Graves says. Other bunks have drains through one side so they can still fill up with water, freeze and crack.

Hes in the process of upgrading the bunks by adding indentations for easier transport using loader forks. The models quickly and neatly store by nesting one on top of another and can be moved by sliding loader tines underneath, then lifting and carrying.

AmeriAg makes 4 and 10-ft. bunks weighing 55 and 120 lbs. respectively. Prices are in the $365 range including S&H but depend on numbers ordered and delivery location.