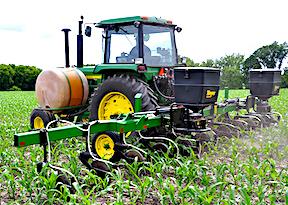 Minnesota farmer Mark Legvold built a cover crop seeder onto his side-dress toolbar to accomplish 2 jobs on 1 pass across his corn fields.  The toolbar with seeder is a simple and fairly light 30-ft. wide machine that we can run at 7 to 8 mph in corn at the V3 to V8 growth stages, says Dave Legvold, Marks father.  We use it for seeding ryegrass, radishes, rapeseed and other cover crop seed while applying 28 percent nitrogen.

Mark built the rig by installing two Meyer salt spreaders on his 12-row toolbar. Theyre positioned just inside the hydraulic cylinders that raise the 3 wing rows on each side.  Says Dave, for an investment of just over $2,300, weve got an efficient way to put down cover crop seed without making a special trip across the field.

After gating down the factory set application rate, the spreaders put out about 15 lbs. of seed an acre. Power comes from an electric motor that Mark controls in the cab. Each unit has on/off switch, speed control and a provision to gate down the amount of material being spread so he doesnt over broadcast and can switch material off while he turns around on the headlands. The tubs hold about 300 lbs. each, which Mark says is enough so they only have to refill the spreaders every other time they re-supply fertilizer in the 200 gal. liquid saddle tanks mounted on the tractor.

The Legvolds say it took a fair amount of trial and error to get the spreaders calibrated, and now that theyre working well, seedling distribution and emergence  is very good. After using the setup for 2 years theyve learned that seed planted in east/west rows emerges better than that planted in north/south rows.   They think its a matter of sunlight penetrating through the corn leaves and warming the soil throughout the day.  They also know that a nice rain after seeding helps germination and that clover seed doesnt do well in shady cornfields regardless of which way the rows are running.  Last year they experimented with a more shade-tolerant seed mix with good results.

Always interested in testing the effectiveness of their new ideas, the Legvolds had the county soil conservation service run a comparison on seed emergence with their machine broadcasting compared to another unit that placed seed between corn rows.  There wasnt any difference in the cover crop emergence, but the other applicator damaged corn because the tractor wasnt equipped with guidance, Dave says.  That damage, plus the cost of making an extra trip across the field validated what were doing.

The Legvolds have also seeded cover crops in standing soybeans using aerial application and have drilled seed after harvest with their no-till drill. Cover crops are extremely helpful in preventing soil erosion, stabilizing the soil, helping  control weeds in the spring  and building an in-ground root system that aids nutrient uptake for the corn and beans, Mark and Dave say.  Well continue with this system because its good conservation that has long term benefits.