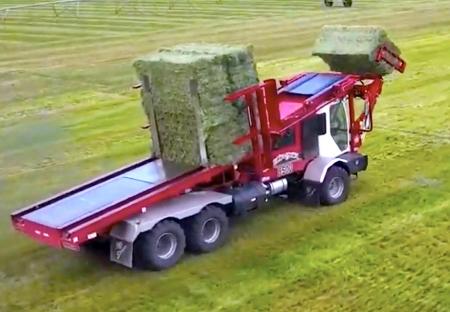 Justin Matlack's Stinger Stacker 8500 is bigger, better and faster than the low-cost bale retriever introduced by his dad and uncle, Larry and Bill Matlack in 1999 (Vol. 23, No. 2). That bale retriever was based on the Matlack Brothers' first truck-mounted bale hauler which was built for their own use in the early 1990s (Vol. 17, No. 5).

The early bale haulers were designed to be mounted on any medium or heavy-duty truck frame, including used trash trucks or schoolbus chassis. What hasn't changed is the basic design with arms that grab bales ahead of the unit, lift them over the cab, and deposit them on back. Unloading is done off the back end of the unit, stacking up to 14 bales at a time in 2 layers of 7 each.

Each Stinger 8500 is built from the ground up with over 500 man-hours in each unit.

Matlack shares that the company has had pretty consistent sales for 28 years. The manufacturing arm averages about one unit per week.

"We try to get ahead in the winter months, but by June, we usually have only half a dozen unsold," says Matlack.

He is also working on the next generation of Matlacks to carry the company forward. "I have two boys 7 and 8 with another child on the way," he says. "The older boys' whole life already is Stinger equipment."